Marina And The Diamonds – The Family Jewels 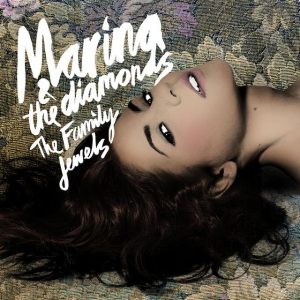 Marina Diamandis has already come a long way. Only six months ago she was playing to a half-empty third tent on a drizzly Friday afternoon at Leeds Festival. Now, she’s been named the runner-up in the BBC’s Sound Of 2010 critics poll and sleb blogger Perez Hilton is tweeting at her, declaring his undying love.

Some of this could be put down to good timing, of course. One-woman bands with curious names and a penchant for quirky pop are pretty in vogue right now, after all. But Marina’s singles throughout 2009 showcased a genuine new talent, with Obsessions and Mowgli’s Road becoming two pop music highlights of the year. But the buzz has ensured that debut album The Family Jewels is one of the year’s more eagerly awaited releases.

On first listen it’s a somewhat bewildering concoction, dizzily spinning from overtly theatrical pop at one turn to heartfelt ballads the next with, ever so occasionally, a song that sounds like it’s had everything bar the proverbial kitchen sink thrown into it.

Mowgli’s Road is a good example of the latter. Brimming with energy from the first shout of ‘Cuckoo!” at the start, it packs in a staccato piano riff, jungle animal noises and more cutlery references than your average restaurant review. It’s certainly kooky, but with enough heart to keep things interesting.

Her lyrics aren’t always so unconventional or Kipling referencing. Girls is a witty, knowing song about challenging female stereotypes: “I fall asleep when they speak of all the calories they eat”. The Outsider tackles alienation and insecurity amongst the first flourishing of fame: “Just because you know my name doesn’t mean you know my game.”

It’s true that, sometimes, it gets a bit wearying. There are so many punchy choruses and electro hooks that, after a while, you start to feel a bit jaded – a point best made by the best songs here being the relatively downtempo numbers. Obsessions, a plaintive ballad about an abusive relationship, is beautiful, while I Am Not A Robot shows a pleasing touch of vulnerability which works very well.

Marina’s voice will also divide people. In a similar manner to Amanda Palmer she takes a theatrical bent to her vocals, making sure to enunciate every word in a manner that becomes a bit grating after a while. She also has a habit of namechecking herself – whether you find Hollywood’s line about “Oh my god, you look just like Shakira, no no, you’re Catherine Zeta, actually, my name’s Marina” endearing or infuriating will depend on your taste.

But she certainly has the charisma to establish herself as a proper popstar, and tracks like Oh No, Shampain and the aforementioned Hollywood are all infectiously catchy and have enough depth not to be dismissed lightly as bubblegum pop. The Family Jewels isn’t the classic debut album that her early singles suggested was on the way, but there’s enough promise here to carry her through the hype.