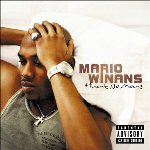 Esteemed producer Mario Winans has been on the fringes of P Diddy‘s Bad Boy Records for sometime now, but has never been given more than backing vocal slots. Hurt No More is set to change that and throw Mr Winans into the limelight big style.

Never Really Wins draws you straight into the album with its clever strings sample elevating the R ‘n’ B track above the bog standard norm. The slick production flows straight into I Don’t Wanna Know, the first single to be released. The Enya track made famous by The Fugees‘ Ready or Not has already been played almost to death – but not quite. The rap cameo from Bad Boy’s boss is as much a sign of mutual kudos as it is beneficial to the track, but name-dropping’s all part of the game.

How I Made it features another State-side hip-hop heavyweight in the shape of Loon. The song samples The Commodores‘ Celebrate, which you’ll recognise as soon as you hear it, even if the name is unfamiliar. The first interlude follows, and unusually it serves to up the pace of proceedings with some haunting pianos fused with Mario’s now familiar understated voice.

Things get a little bit slushy with 3 Days Ago and What’s Wrong With Me, the latter with a distinct lounge vibe helped by slow bass effects. It doesn’t really help that Can’t Judge Me continues this theme – it’s these types of songs that explain why Sisquo‘s Unleash The Dragon is harmlessly collecting dust in my CD rack.

Interlude Enough darkens the vibe with a minute’s worth of heavy, fast-paced beats layered over a sinister phone call. Strangely it leaves you begging for it to break into a proper song. But it only leads into Pretty Girl Bulls**t which features the self-proclaimed “most critically acclaimed rap bitch in the game” – Foxy Brown. The song’s an awkward listen with clear West Coast allusions in the beat, which feels completely wrong in the context and delivery of the track.

This Is The Thanks I Get swiftly makes it clear that the use of flutes strangely makes for a fantastic beat. Flutes and swift beats make for possibly the most awkward juxtaposition imaginable but when Black Rob raps over it you get the impression you’re listening to something special.

Hurt No More then sort of fades away into nothingness only to be resurrected by closing track The Game, but the smoothness of the album has as much to do with that as the quality of the songs. The album isn’t great, and other than I Don’t Wanna Know there isn’t much in the way of mainstream single potential, but that’s the nature of the genre. This is a must-have for any R ‘n’ B fan – anyone else should approach with caution.