Marissa Nadler – For My Crimes 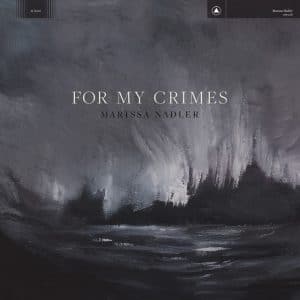 Marissa Nadler has been releasing records since 2004, and her sound has been so perfected over the years that For My Crimes sounds like the quintessential album from the Boston native. While Nadler’s style is sparse, ghostly and fragile, it’s her songwriting that really stands out – these are arguably as much stories as they are songs.

Like the rest of her albums, For My Crimes is a downbeat affair, and the subjects of her songs are suitably morose. There have been a few songs written from the perspective of Death Row (Nick Cave‘s The Mercy Seat, Bruce Springsteen‘s Dead Man Walking), but the title track here certainly sits among the best.

It’s a beautiful start to the record, all finger-picked acoustic guitar and hushed strings, while Nadler places herself into the mind of the condemned prisoner, mulling over the “terrible things” she’s done, inviting people to “watch behind the glass as I pass through serpentine”. It’s the chorus that lingers though: “please don’t remember me for my crimes…”

Nadler’s songwriting has a real knack of picking up little details and magnifying them: I Can’t Listen To Gene Clark Anymore deals with how the break-up of a relationship can even rob you of your favourite songs, while Said Goodbye To That Car becomes impossibly poignant as she associates various memories with the soon to be scrapped vehicle.

As befits Nadler’s status in the industry, there are various guest stars on For My Crimes, although none of them overshadow Nadler herself. Sharon Van Etten adds some unobtrusive backing vocals to I Can’t Listen To Gene Clark Anymore, and Angel Olsen gives the harmonies on the title track some extra weight.

Although most of the songs on For My Crimes are distinguished by minimal arrangements, there are a few moments that stray from the template – Blue Vapor is a suitably doomy ballad, filled with reverb-heavy guitar which builds up slowly until it comes to a climax with drums crashing around everywhere. On a album that’s notable for its solemnity, it’s a real wake-up call right in the middle of the record.

If there’s an issue with For My Crimes then, it’s that there’s more than one occasion where the songs seem to bleed into one another. While the arrangements are impressive and well crafted, it’s impossible to deny that, by the second half of the album, especially, it seems to drag a bit.

Yet for those who love to wallow, there’s plenty to delight. Nadler has a way of presenting a lyric that feels like a jab to the heart – in All Out Of Catastrophes, there’s the lover who “in your sleep, you called me Natalie… it was the nicest thing you said” while Are You Really Gonna Move To The South manages to perfectly encapsulate the sense of loss which comes with the end of a relationship: “in my car, I look to the right, where you’d sit, just a beam of light” is one such evocative example.

It may not be the liveliest 35 minutes of the year, yet it’s filled with memorable imagery and some heartbreaking songs. For anyone who’s never heard any of Marissa Nadler’s work before, For My Crimes makes for an excellent starting point.