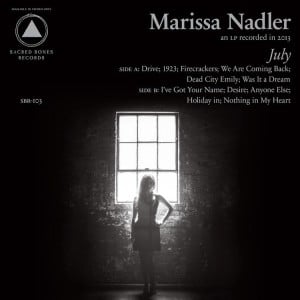 Marissa Nadler is, these days, something of an overlooked veteran. Her progress from 2004 debut Ballads Of Living And Dying to July, her sixth full-length album, has been a glacial glide through ethereal, spectre-like soundscapes illustrating the homeland of heartbreak – wide-open spaces, and candlelit reminiscences that are forever autumn.

Following on from 2012’s The Sister mini-album, July carries on weaving a lush, primarily monochrome, palette. Post-metal/psychedelic producer Randall Dunn is on board, and he conjures washes of colour and a siren-like quality from Nadler’s timeless nocturnes that unhook her songs from their earthly tethers.

Never has an album title been more misleading; this is not summer, open-top car driving, feel-good music, much the opposite; music for indoors, at night, by a fire, hungrily nursing a large glass of melancholy.

Nadler plays deep into the deltas of the American Gothic themes, flicking through sepia-toned photographs to inhabit these timeless tales of longing, loss and lingering looks over the shoulder. It’s this obsession with what goes on behind the American Dream that captures another like-minded soul, one David Lynch.

Conjuring with the wounded voodoo of Cat Power, Kristin Hersh, Mazzy Star, Marissa Nadler needs little more accompaniment than her own harmonies, some softly plucked acoustic and the funereal beat of a muffled drum to do her bidding. Only on closer Nothing in My Heart does the guitar give way to stark piano where the weather is blamed for feeling empty. But don’t make the mistake of mistaking this for a rootsy folk album, unless that folk album is sat in the dark, in a narcotic haze, gazing at the stars, with a suitcase of grudges and a guitar.

The hushed warmth of album opener Drive coasts through a heat haze on gossamer pedal steel guitar and ghostly harmonies, with reminiscences of remembered song lyrics and the auto route to and from dreams or nightmares before the loaded opening lines “if you haven’t made it now you’re never gonna make it” hit home.

Holiday In tells the bleak tale of standing on a pier pining over the lost love of a rogue who’s ‘got a girl in every state and no-one in the way’ over some nimble finger-picking. I’ve Got Your Name’s tale of louche behaviour of being ‘another feather’ for a roving bounder. While Desire speaks of misplaced feelings of love on the road.

As with all classic gothic work, blood is never far away, whether it’s the crimson corporeal element, the menstrual type or bathing in the good old-fashioned murder ballad Firecrackers, which comes on like a post-coital sigh of “spilling blood” in summer days; it sounds dreamy until you realise that it’s about attackers looking for her. Was It A Dream’s woozy refrain of “was it a dream or was it something sinister” and that “it’s the same blood but everything is new” conjure hazy sleep-doped uncertainty.

Single Dead City Emily pushes church-like organ against banks of Nadler’s harmonies drenched in reverb that call to mind late-period Cocteau Twins – apt, given former member Simon Raymonde’s ownership of Bella Union, the label releasing this album. Her praise for Emily’s inhabiting “a dead city” when “any other man would’ve run away” paints a post-apocalyptic picture of a spent town full of ghosts.

Nadler lures you in like a mermaid with her soothing harmonies, enfolding you in an aural balm, pulling you in gently to bask in the bleakly beautiful. It’s not a pretty world to live in all the time, but for a while the twilight tones are the perfect place to rest a broken or bruised heart, or just take some comfort from Marissa Nadler’s exquisite craft.