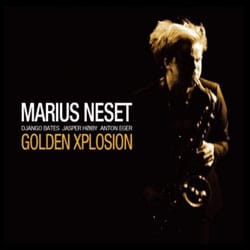 Young Norwegian saxophonist Marius Neset has provoked considerable critical rapture in the UK for this fearless, exciting debut album. It’s not hard to understand why, given the strength of Neset’s eleven original compositions and the breathtaking technique on display in his playing. What is perhaps most impressive about Golden Xplosion is the way it deftly balances a variety of musical styles and approaches, from fearsomely intricate contemporary rhythmic experiments, to more lyrical and accessible playing on a handful of tracks. That Neset can play everything here with the same degree of commitment and is remarkable – and it is this unshakeable authority that helps an album of disparate material cohere brilliantly.

It certainly helps that Neset has assembled an extraordinary ensemble. Playing keys and synths is an on form Django Bates, Neset’s teacher at the Copenhagen Rhythmic Music Conservatory. Bates is a mischievous musician who divides opinion. At his best, he is inspired and exciting (as here), raising the intensity level of the music, but he can sometimes play in an over-dominating manner. The rest of the rhythm section is borrowed from the excellent London-based trio Phronesis, with Jasper Hoiby on bass and Anton Eger on drums. Eger has an unusual sound amongst jazz drummers, with his low tuned drums more usually associated with a rock sound. His ability to articulate complicated lines is nevertheless outstanding and he imbues this band with a sense of energy, forward motion and compelling accuracy.

One of the great strengths of Golden Xplosion lies in the exploration of various textures. The album is peppered with various solo saxophone features and interludes that demonstrate Neset’s core talents. When the band play together, it is with an amazing tightness, handling the tricky time signatures of the title track with comfort and ease. The result is intelligent music that also has a punch and visceral power. It is perhaps more preoccupied with rhythm than with melody, but the group’s energy and consummate flow is so exciting as to more than compensate for this. The breathtaking City on Fire may be the best example of this, blending contemporary rhythmic techniques, perhaps inspired by Steve Coleman, with long, eloquent, be-bop inspired phrasing.

The carefully orchestrated saxophone intermezzos demonstrate Neset’s musicality and that he has a capability for subtlety amidst all the furious interaction. The saxophone intermezzos both have something of a contemplative, devotional quality. Two tracks here particularly demonstrate Neset’s maturity – the striking, restrained ballad Sane and the glorious Angel Of The North. The latter has a glistening, eloquent themes, marching drumming and graceful playing throughout.

Although Golden Xplosion is not Neset’s debut (he released Suite for Seven Mountains in 2008), it will most likely be the first recording that UK audiences have heard from him. He has been launched into the UK jazz marketplace fully formed, capable of extraordinary flights of dexterity and rhythmic trickery, yet also with a strong sense of fundamental musical language and compositional flair.