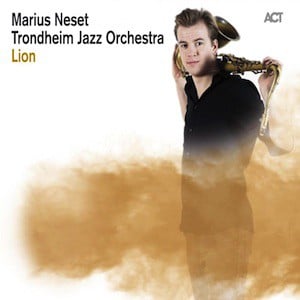 Still only 29, Marius Neset could reasonably be described as a leading figure in Scandinavian jazz, and arguably more widely in European jazz. His albums as leader for Dave Stapleton’s Edition records explored energy and rhythmic complexity to great effect (with members of Phronesis in his rhythm section).

Now with a new contract with the German label ACT, Neset’s supporting cast has changed dramatically for this release – working with the remarkable Trondheim Jazz Orchestra. At 12 pieces, the Trondheim ensemble is slightly smaller than a conventional big band – but this seems to allow for an impressive range of colours and dynamics. The musicians also seem adept at handling Neset’s intricacies and demands.

Much of the music here is new and commissioned specifically for this project. It is some distance removed from any conventional big band sound. The title of ‘Jazz Orchestra’ seems entirely appropriate for this ensemble given the depth and range of timbre they create. The new music is predictably bold, imposing and exciting, not least the wide-ranging title track that opens proceedings. It is, of course, worth remembering that lions do sleep a lot – and this might go some way in explaining that track’s surprisingly calm and mysterious opening. Over the course of its ten minutes, Lion seems to explore the possibilities of the contrasts between supreme monarchical predator and resting threat.

The album also contains some large ensemble reversions of previously recorded work. The two title tracks from Neset’s previous album (Golden Xplosion and Birds) prove particularly fruitful vehicles for this ensemble. In its small band incarnation, Golden Xplosion seemed something of an exhibition for Neset’s rhythmic execution, but also for the rapid-fire, twitchy keyboard imagination of Neset’s mentor-turned-colleague Django Bates. In this setting, it sounds meticulously orchestrated and precise – and is able to build into bursts of glorious colour. Statements seem to snap and crackle from all sides of the orchestra. Thankfully, Birds still sounds like a truly remarkable composition a year on from its initial release, and it provides a suitably intense and dramatic conclusion to this tremendous suite of music.

At its best, Neset’s music has a knife-edge sense of danger and peril. It feels as if its well-rehearsed perfection could fall apart at any minute, yet Neset and his accompanying musicians not only have the technical skills but also an acute hyper-awareness that keeps everything both accurate and exciting. All this remains on show on Lion – but this is also an opportunity to get a stronger sense of his arranging talents. These were already coming into evidence on Birds, where he utilised an unconventional and larger ensemble to achieve his desired colours and textures. Here, Neset deploys clever, unusual harmonies and integrates the ensemble effectively (particularly on the impressively detailed lattice of In The Ring), but he also shows an understanding of the need for contrasts and for space. Sometimes the music is stripped back to just drums, bass and baritone saxophone, whilst at other times, there are lines darting back and forth, sometimes conversing, at other times more like rocket fire.

As staggering and breathtaking as Neset’s arrangements are, they can be restless to the point of containing too much information. It would be great to hear Neset explore the melodic side of his writing a little more. This was hinted at on Angel Of The North on Golden Xplosion, a sweetly emotive tune that stood out from the rest of the pack. It’s also suggested again here by the rich, alluring introduction to Sacred Universe (in a treatment that also dares to swing). That being said, it is somewhat hard to believe that Neset might be able to add yet more elements to his craft. Lion roars proudly, with some justification.