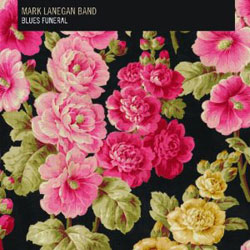 Remarkably it has been eight years since Bubblegum, Mark Lanegan’s last solo album. He’s not been hiding under a rock, necking whiskey and tattooing his knuckles during that time, far from it. Well, he might have been necking whiskey and tattooing his knuckles, but Lanegan has been anything but hidden from view. He’s found time to release a series of wonderful albums with Isobel Campbell, fronted Queens Of The Stone Age, contributed vocals to Soulsavers, paired up with Greg Dulli for The Gutter Twins, and released material with The Twilight Singers.

The ’90s Grunge scene has given us many things in terms of fickle fashion (flannel shirts and indie bands insisting on playing Fender Jaguars for example) but in terms of the actual sound of the time few things have endured as well as Cobain’s howl and Lanegan’s smoke infused drawl. When Lanegan sings, whatever band he’s lending his vocals to or whatever song he is singing becomes his. He defines the material – such is the power of his dense tones.

After eight years of bending the material of others towards his magnetic presence, Blues Funeral represents Lanegan on his own terms. Although the usual collaborators Alain Johannes, Josh Homme, Chris Goss and Greg Dulli are all present and correct (with Johannes providing his services as a sounding board for Lanegan’s ideas) this is very much a pure Lanegan record.

Unlike the Lanegan’s earlier stipped back ventures of The Winding Sheet or Whiskey For The Holy Ghost, Blues Funeral is at times a lively affair with rock and hard liquor in its veins. Naturally Lanegan’s tendency to sound like a barfly singing songs of regret and repentance lends the album a layer of sorrow. Nevertheless, there are moments where the songs reach for gratification and release in spite of him, via heavenly chord changes (Bleeding Muddy Water) or chaotic excess (Riot In My House).

The rolling bass and drums rumble of The Gravedigger’s Song that introduces the album is not a million miles away from something Queens Of The Stone Age might have written. Its incessant propulsion carves a deep hypnotic trench as some untamed guitars howl and stab like the bloodied beaks of a particularly murderous flock of crows. Grey Goes Black possesses an almost disco like beat, but being a Mark Lanegan song it’s more of a graveyard skiffle complimented with haunted guitar interjections reminiscent of the ’50s twang that Angelo Badalamenti adopted for his work on Twin Peaks.

Ode To Sad Disco meanwhile finds Lanegan in slightly unfamiliar territory with a straight up disco beat and soaring guitars providing his backdrop. That it sounds like a state funeral soundtracked by Pet Shop Boys only serves to make it one of the highlights of the album. Most importantly, Lanegan himself doesn’t appear out of place whatsoever as he props up the bar muttering about the DJ finally playing some decent tunes. Quiver Syndrome heads back into rock territory and Lanegan is clearly in comfortable surroundings here, but coming shortly after Ode To Sad Disco, it just seems a bit too easy. Fortunately Harbourview Hospital sees him setting up the disco in the Emergency Room. With ’80s synths mixing with reverb drenched guitars and a tin-pot drum machine Lanegan creates a haunting and powerful soundscape which somehow insists that any bad news that waits in the future will most likely be soundtracked by this song, or New Order.

Some might find Lanegan’s all encompassing dour nature too much over the course of an entire album but ultimately it’s impossible not to get swept away by the emergency room blues of Leviathan, or the electro-swamp-psychedelia thrum of Tiny Grain Of Truth and not marvel at Lanegan’s damaged genius in the process.