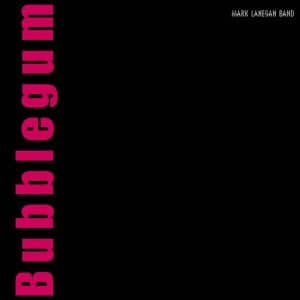 Mark Lanegan‘s smooth-as-sandpaper voice has been an alternative mainstay for almost two decades now. It was in the mid-’80s that Lanegan formed and fronted bluesy, psychedelic grunge outfit the Screaming Trees, whose peers and friends included the like of Nirvana and Soundgarden. The Trees disbanded in 2000 (1996’s Dust LP proving to be their last), but Lanegan’s solo outings stretch all the way back to 1990’s The Winding Sheet (featuring Kurt Cobain and Krist Novoselic).

More recently, Mr Lanegan has been more closely associated with that rock jack-of-all-trades Josh Homme, guesting both live and in the studio with Queens Of The Stone Age (that thick, ethereal vocal on The Hanging Tree? That’s Lanegan) and the critically acclaimed Desert Sessions ensemble. Like his contemporary Chris Cornell, Lanegan has cropped his locks and left a drug-hazed ’90s behind him, moving from musical strength to strength and winning many over in the process.

While Bubblegum may be his first full-length release for three years, the music industry has been making positive noises about the intermittent efforts (most notably last year’s Here Comes That Weird Chill EP). But let’s get down to business – Bubblegum is, above all, a moody, stylised collection of deeply personal, largely acoustic tracks that boast the talents of PJ Harvey, Josh Homme, Dean Ween, Izzy Stradlin and Duff McKagan. Lanegan picks up the baton and runs with it from start to finish, never losing the thread, from languid, regretful opener When Your Number Isn’t Up to the fading tones of Out Of Nowhere’s fragile Americana.

The closest comparison comes not in the form of The Screaming Trees’ foot-to-the-floor tendencies, or QOTSA-esque stoner rocking, but with the Desert Sessions’ dusty, old-time eclecticism. Hit The City, featuring Polly Jean’s considerable talents in harmonies, is easily one of the most essential tracks of the year, melding provoking lyrics and basement studio principles with a fuzzy bassline worthy of your undivided attention. Wedding Dress adheres to a similar outlook, plodding along with such lethargy and minimalism that it would be an ideal soundtrack to a foot-crossing of the Sahara.

Methamphetamine Blues is an altogether trippier deal, keeping the listener on his/her toes like a warden at a sun-baked, outback prison, while Bombed is a short, stripped, unplugged plod, in which the narration of Lanegan’s pestle-and-mortar tone and light, feminine harmonies is utterly mesmerising. It is used throughout the album, in fact, but never gets old.

Sideways In Reverse, and not Strange Religion (featuring Izzy Stradlin and Duff McKagan), is Bubblegum’s most focused moment, with a two-chord riff that invites you to get to your feet and get something, anything, out of your system. “Going down, going down deeper / Gimme your love!” barks the chorus.

Bubblegum is everything you’d expect from the line-up; from the sensual contributions of Harvey to the intelligent subleties of Ween, all presided over and held together by Mark Lanegan, who has, for too long now, been the bridesmaid of his time. Bubblegum is a fine example of his abilities, exhibiting the many tributaries that make up his unique brand of rootsy alt-blues.

As credible as Cobain and as versatile as Homme with an unmistakable voice to die for – Lanegan is a true musician’s musician.