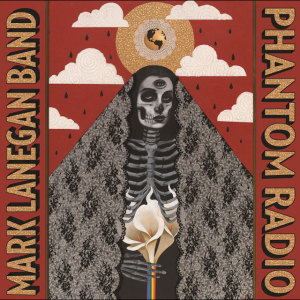 It’s easy to forget that Mark Lanegan has a solo career. He first came to prominence in Screaming Trees and subsequently released the likes of The Winding Sheet and Whiskey For The Holy Ghost under his own name. Yet he’s arguably more well known for his collaborative endeavours. He’s teamed up with Greg Dulli from Afghan Whigs for the quite fabulous Gutter Twins, and his work with Isobel Campbell has always been quite exquisite. In recent years, he’s been the go to guy for any band requiring a tobacco and whiskey stained vocal, appearing with Queens Of The Stone Age, Earth, Moby and Soulsavers amongst others.

Phantom Radio, his second solo album in 10 years, offers a rare opportunity to hear Lanegan tread his own path, and head into different territory. This is an album that attempts to move away from simply reworking blues and straight up rock; this time he’s embracing synths and post-punk. Apparently he’s had a long standing admiration for the likes of Echo And The Bunnymen, The Gun Club and Krautrock but has waited until now to channel those influences into his work. By building the drum patterns for the album on his phone with an app called Funk Box and pushing the synths to the fore, Lanegan has infused much of this material with the sounds of his influences successfully. Admittedly it is a little tinny in places, and sometimes the warmth of that voice makes for an awkward fit with the detachment of the music, but for the most part, it works rather well.

Harvest Home sets the bar high, with Lanegan stating his apparent contentment with his solitary status. Icy synths provide a suitable back drop for this tale of determined solace and where the guitars would normally insist on rock n roll oblivion, here, they’re spindly and ever so slightly creepy. It is a statement of intent right from the start, this is Lanegan, out there on his own, and although there’s a sense of isolation (and there are shades of Joy Division) he seems to be happy with the situation. Or perhaps, he’s simply adapted to it as lines like “happy that I’m made of stone” suggest that he’s proclaiming his mental toughness, whilst not quite believing it.

In a similar vein is Floor Of The Ocean, which is, in truth rather unremarkable but for his voice. Whilst it is full of chilled emotion, understated guitar riffs and a surprisingly effective gothic interlude, it feels a little lazy. The Killing Season is a little better, which bubbles with a Talking Heads style synth, but it’s on Seventh Day where he really finds his feet. Quite often, Lanegan’s voice is so effective that it renders everything around it ordinary but in the midst of this strangely quaint funk track, the mix is perfect. Flutes and strings swirl around him as the guitar and bass keep things slinky, for his part, Lanegan almost sounds as if he’s having a ball. At the other end of the spectrum is the beautiful Torn Red Heart which tugs forcibly at the heartstrings in the manner of a Baby Bird song and the slow paced haze of Waltzing In Blue finds Lanegan drifting in a cloud of soft-focus synth drama. The mix of darkness and elegance in these two songs in particular serves him well.

Although much of Phantom Radio is dedicated to finding new pastures, Death Trip To Tulsa and Judgement Time are both rooted in Lanegan’s previous work. Judgement Time for example is a heartfelt reverie of regret, awash with religious symbolism and set to the swells of a maudlin organ. Death Trip meanwhile is the closest he gets to a rock track, and Lanegan uses it to assess the past and the results of a life lived hard. Essentially it’s the conclusion of I’m Waiting For The Man, in that it sounds great, but there’s a harsh reality that needs to be faced. This is perhaps true of the whole album, which finds Lanegan dealing with past and facing the future alone, but determined.