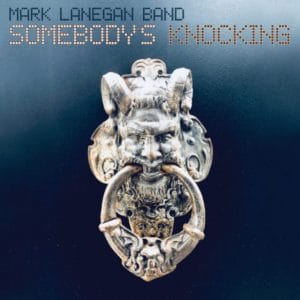 With such a significant back catalogue behind him, it’d be all too easy to assume what a new Mark Lanegan album would sound like. Over the years we’ve come to expect those grizzled vocals to ride roughshod over a backing of introspective folk or to add a touch of whisky soaked authenticity to a squall of desert-fried rock.

The first two tracks of Somebody’s Knocking do little to suggest that anything has changed since his last effort, Gargoyle. Disbelief Suspension and Letter Never Sent both rumble along with the familiar sound that we’ve come to expect from Lanegan, but then things start to change. The signs are there in the opening salvo of Somebody’s Knocking with the disconcerting synth swells, the slightly icy guitar licks and the drum sound, but it’s not until Night Flight To Kabul that everything starts to come into sharp focus. The drum intro calls to mind the production of Duran Duran, whilst the rumbling bass and simple but incisive guitar lines come direct from the rain soaked streets of Manchester that Joy Division once inhabited.

Lanegan has looked back into his past love of European Electronic music and coupled that to current listening habits to inform the sound of Somebody’s Knocking. The result is an album that retains the heft of his more rock oriented efforts (and there’s still a fair amount of that here) and attempts to cut a new furrow by incorporating the sounds that continue to influence its creator.

Those wanting the pedal down moments of exhilaration will not be disappointed, the likes of Stitch It Up flash by with the kind of energy that Iggy Pop and MC5 possessed in their prime (and to be fair, still possess). Lanegan hasn’t sacrificed any of his directness in order to channel these new influences at all. As usual, his love of the music that excites him shines through and makes the album a complete success.

Dark Disco Jag is every bit as foreboding as its title suggests. Stripped back completely to the bare bones, its pulsing beat and echoing guitars provide a swirling darkened space for Lanegan to inhabit as he sings of blood on lips and bruises on hips. It’s entirely in thrall to Joy Division, but isn’t a mere facsimile, there’s an inventiveness here, even on a song so simplistic in its construction.

On Penthouse High, he drawls “Don’t step inside this house”. Whilst the sentiment is entirely at odds with Primal Scream‘s call to Acid House abandon, Slip Inside This House, the series of electronic blips, the simplistic keyboard motif and basic kick drum beat suggests that there’s actually not very much difference between the two songs. There might be ghosts inhabiting Lanegan’s penthouse, but it’s entirely likely that they’re there to party. That he also alludes to Elvis Presley’s Suspicious Minds (he’s caught in a trap) and pulls on New Order for influences suggests that he’s throwing everything into the mix this time around.

Lyrically, Lanegan straddles the line between reality and a dreamlike otherworld. This is an album populated by ghosts and hazy imagery. He’s dripping acid from the dropper on the opening track, by the time he’s wandering the desert in a paper hat (the suitably woozy Paper Hat) he’s conjuring up images of Wonderland, the Cheshire Cat and Jesus. Elsewhere, there’s a red headed demon, harlequins, King David and Dionysus.

At one point on War Horse Lanegan declares that he’s stoned and sacrilegious, and that’s a fairly accurate summation of the album as a whole. There are serious points and subject matter across Somebody’s Knocking, with the state of the world at the moment, how could there not be, but Lanegan is careful to infuse his songs with metaphor and classical reference points, making an intriguing mix of imagery and rhetoric that requires thought and immersion to untangle.

Somebody’s Knocking is the sound of someone viewing the world and not quite believing whether or not any of this can possibly be real. The events of the last few years might feel like an acid trip because it’s all too crazy to be true. The feelings of isolation that Lanegan has channeled into his music and lyrics are beautifully served by the influences that he’s using, and the result is an album that feels both current and historical. Most importantly, it’s another absolute masterclass crammed with songs that drill their way into your head and stay there.