by John Murphy
published: 9 May 2013 in Album Reviews
Tweet 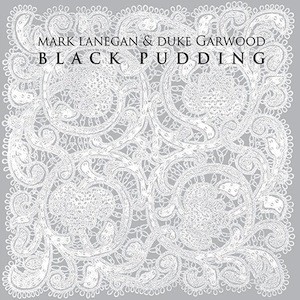 Mark Lanegan likes his collaborations. From the obvious choices (Queens Of The Stone Age, Greg Dulli) to the more eyebrow-raising (Isobel Campbell of Belle and Sebastian), the former Screaming Trees frontman has always picked his musical partners with care, ensuring that both parties complement each others’ strengths.

Black Pudding sees Lanegan linking up with the London-based multi-instrumentalist Duke Garwood, who has played with Archie Bronson Outfit and The Orb and released four solo albums under his own name. He’s the perfect foil for Lanegan – specialising in a dusty, cinematic guitar style that recalls Ry Cooder‘s film soundtrack work. In fact, Garwood’s style is so suited to Lanegan’s, that it feels more like the latter’s solo work than anything else.

Two instrumentals bookend the album – the title track and Manchester Special – but otherwise the album is dominated by Lanegan’s famously gruff baritone. It’s the sort of voice that, even if you’ve smoked 60 a day and drunk a bottle of whiskey every week, you’d still never replicate; an impossibly deep, leathery vocal which imbues emotion into every note. Every so often, Garwood will chip in with some soft backing vocals, but this is very different to Lanegan’s partnership with Isobel Campbell, where the two voices contrasted and complemented each other.

Instead, Garwood concentrates on some intricate finger-picking guitar, highlighted best on the title track and on the eerie, atmospheric Sphinx. The sparse instrumentation of Last Rung is also a highlight, although the funeral pace of most of the tracks here means that Black Pudding is often an album to be appreciated rather than enjoyed. Although the musicianship is terrific and Lanegan never sounds anything but compelling, songs like Death Ride and War Memorial are as cheery and feel-good as the title would suggest.

Cold Molly is the one exception to the gloom – a terrific, funky, even sexy groove in which Lanegan’s lugubrious voice melds perfectly with Garwood’s elastic bass and slide guitar work. It’s the sort of song which grabs attention straight away, in contrast with the rest of the album which tends to work best as rather stark background music. With the exception of Cold Molly, the main problem is that each track sounds exactly the same. This is all great in small doses, but often becomes a bit wearisome over the course of a 12 track album.

None of this will put off hardcore fans of Lanegan of course – he does what he does extremely well, and Black Pudding is no exception to this – but for anyone who wants more than a taster to that extraordinary voice would be best checking out his Isobel Campbell collaborations before this. Black Pudding, like the foodstuff it’s named after, is more of an acquired taste.