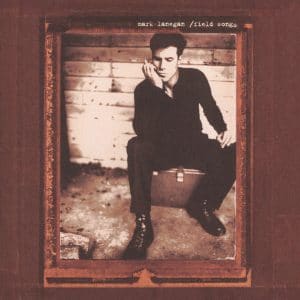 Mark Lanegan is best known for his years as the vocalist for the Screaming Trees. However he’s also been building a following for the last 10 years with solo albums that highlight his love of American folk and blues. Field Songs, his fifth album, continues in that vein with a collection of mournful, keening songs of love and loss.

Lanegan uses his dark husky voice to good effect, especially on standout tracks One Way Street and Don’t Forget Me, usually backed by the simplest of acoustic guitars with a few unidentifiable grungy noises or some subtle organ to add atmosphere.

This is the same voice that is currently fronting Queens Of The Stone Age for their tour of barns like the Brixton Academy. More gentle and optimistic tracks such as Pill Hill Serenade display a lighter side to the voice, making an effective contrast, and Kimiko’s Dream House is almost elegiac, with a Neil Young flavour. The title track Field Song is curiously unsatisfying however and seems almost a work in progress at around two minutes long.

For a such a sparse and deceptively simple solo album there’s a long list of collaborators, including Richard Johnson (Dinosaur Jr) and Ben Shepherd (Soundgarden) on guitars. The one instrumental track, Blues For D features the latter: it’s fabulous.

Overall, Mark Lanegan has produced a lovely album for reflective moments, though the whole doesn’t quite match up to the gorgeous sweeping sound of the very first track.