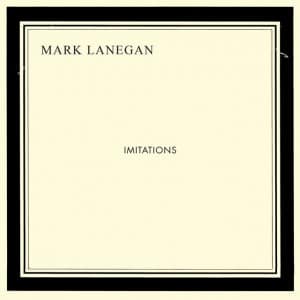 There is only one Mark Lanegan. Nirvana’s In Utereo might well be getting the anniversary treatment at the moment, but perhaps the most evocative sound to come from the grunge era is his deep, tobacco and whiskey stained voice. Nobody else sounds like Lanegan; he really is out there on his own in terms of timbre and resonance, as anyone who has caught his work with Screaming Trees, Queens Of The Stone Age, Isobel Campbell, The Gutter Twins or Soulsavers will attest to.

So for him to title an album Imitations is a peculiar move. Admittedly, these songs are all covers and allow Lanegan to pay homage to the songs that his parents would play when he was a youngster, but to call them imitations is pushing it. An imitation is usually a term applied to an inferior copy of an original, but with a couple of exceptions these versions are all high quality interpretations, not cheap and cheerful knock offs. If Lanegan felt in awe of some of the original artists (Andy Williams, Nancy Sinatra, Frank Sinatra) when titling his album, he’s underrating his ability considerably. Over time his voice has matured into something quite phenomenal (he recently described his early Screaming Trees performances as being akin to kindergarten in terms of his vocal development) and truly emotive. Back in the ’80s he might not have been able to perform these songs as he would have liked, but now, he can hold his own with the legends of crooning (for want of a better term).

With Lanegan’s voice taking centre stage, it’s easy to overlook the contribution of his backing band. Without them, this album could easily have faltered. Many of the arrangements are stripped back affairs, but with delicate orchestral touches (such as the feather light strings on Deepest Shade), they give these songs an emotive warmth that wraps around Lanegan’s vocals perfectly. Even when he’s not singing, they exude a voice of their own. They lift simple blues of opening track Flatlands and push it towards an elegant, sweeping conclusion. At the other end of the spectrum (and album) is Autumn Leaves, the third Andy Williams song on Imitations. A full orchestral sound, akin to John Barry or the classical tinged pop of the ’60s, it is a quite majestic closer that finds the band and Lanegan complimenting each other, pushing on to new heights of heartbreak. The version of Nick Cave’s Brompton Oratory is similarly affecting. Naturally the vocal fit is almost ready made and works perfectly, but the echoing guitars and haunting horns are sublime.

When the band are totally stripped back, Lanegan is such a gifted vocalist that he can carry the weight of the songs on his own. His take on the Bond theme You Only Live Twice is practically skeletal yet the arrangement works such is the strength of his performance. Similarly, Solitaire provokes a sense of awed wonder. The orchestration is present, but takes a supporting role putting a heartbroken Lanegan centre stage (presumably with collar loosened, tie undone, and cigarette smoke spooling around his ankles). It seems as if he’s whispering the words right into your ears.

There are a couple of moments where the conceit doesn’t quite work. Élégie Funèbre, for example; it’s churlish to suggest that it’s because Lanegan’s crooning in French, but somehow, the emotion isn’t there. Mack The Knife meanwhile is a dog of a song at the best of times and even though he’s got a hint of Satchmo creeping into his vocals, he can’t make it fly. Yet, these slight dips aside, Imitations could never be described as pale.