by Sam Shepherd
published: 8 May 2020 in Album Reviews
Tweet 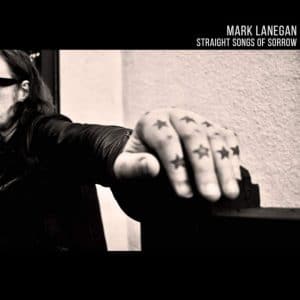 Pity the Mark Lanegan completist. Every month seems to bring another collaboration, project or solo release. His output is prolific, but then when you’ve got one of the most grizzled and wonderful vocals in the world, it’s not surprise that he’s in high demand. Straight Songs Of Sorrow comes hot on the heels of Lanegan’s memoir/biography, Sing Backwards And Weep and unsurprisingly, he takes influence from this book to inform his music this time around.

The book itself is a fascinating insight into Lanegan’s early years and time as a troubled junkie, the narrative ending shortly before his time with Queens Of The Stone Age and more recent output with the Mark Lanegan Band, The Gutter Twins and Isobel Campbell (although there is, no doubt, another story that needs telling there). What is impressive about Lanegan’s tale is that he never once makes an effort to make the reader like him, in fact, for large parts of his story, he comes across as a thoroughly unpleasant individual.

He appears to have hated much of his time in influential Seattle band Screaming Trees and eventually swallowed up by countless addictions, he becomes increasingly desperate, fucking over pretty much anyone that he comes into contact with. Scores are settled (Lanegan seems to really bear a grudge if you piss him off) and everyone from his old record label, old friends, to ex-band mates get a going over. He seems to save his ire predominantly for the guy who made off with his considerable porno collection and Liam Gallagher, the latter of which has recently re-ignited a war of words on Twitter – much to the delight of everyone. But the main focus of the book is on drugs. They consume huge parts of both narrative and author. The take away from the book is that Lanegan is lucky to be alive and that being a junkie is really hard work. The sheer effort he puts in to score is at times incredibly impressive, sad, and darkly comic. It’s a tale of death, addiction and sorrow, but one worth reading.

Whilst many others didn’t escape the Grunge explosion of the ’90s with their lives (Andrew Wood of Malfunkshun and Mother Love Bone, Layne Staley of Alice In Chains, Kurt Cobain, Kristin Pfaff of Hole… the list is seemingly endless) somewhat miraculously Lanegan made it and he’s putting that voice to good use. Straight Songs Of Sorrow, takes its lead from the tales and feeling of the book and the important people in his life. It’s an uneven work that occasionally lacks focus, but Lanegan could sing the phone book, let alone his own life story and still sound amazing. It kicks off in fine style with the minimal brooding electronica of I Wouldn’t Want To Know, a short but sweet acoustic tune in the shape of Apples From A Tree, and the beautiful orchestral sweep This Game Of Love. Of course, this being tied to the tales of Lanegan, there’s a darker side to these songs. Apples From A Tree speaks of loss and touches briefly on issues related to his mother. This Game Of Love meanwhile finds Lanegan sharing the vocals with his wife Shelly Brien and deals with the considerable ups and downs of relationships, with loss and fear of loss being central to song.

Unusually for a Lanegan album there are a few missteps, with the lyrical content of Bleed All Over becoming somewhat repetitive, and Ketamine sounding as if it might have tripped and fallen into a K-Hole. Strangely, the atmospherics of Churchbells, Ghosts are so effective that Lanegan’s vocals seem superfluous, which is an incredible thing to find on any album that he graces, let alone a solo release.

These slight quibbles aside, there is plenty of gold to be found here. Hanging On (For DRC) pays homage to his friend and Seattle legend Dylan Carlson. “By rights we should be gone, but you and me still hanging on, a thousand ways we should have died” Lanegan sings, “our comrades drop like meat from bone”. It’s a heartfelt nod towards his great friend and survivor and is one of the most touching moments on the album in that it contains the most obvious expression of love and positivity.

Elsewhere he’s stark in his honesty about himself. In the darkened, atmospheric thrum Ballad Of A Dying Rover he’s a sick, sick man. “Girl, I wouldn’t lie to you” he intones, before clarifying, “ain’t no surprise though if I do”. It’s a line that encapsulates the Mark Lanegan that inhabits the pages of his memoir. There is a sense of regret and trying to make amends too, albeit when seemingly facing the choir invisible. On Burying Ground he’s a broken man (so broken he can’t feel pain), he’s been up for six nights straight, and on death’s door he finally starts to put things straight. “Tell them I am sorry for the things that I have done” he croaks, before asking for his post to be sent out too. If nothing else, he’s organised, even after a six day bender.

Ultimately there’s a sign of positivity at the end of the album with Eden Lost And Found. “Daylight’s calling me, sunrise coming up, to burn the dirt right off me.” he croons as the strings behind him start to swell and soar. “Everybody got to be free” he sings, presumably now free of the addiction, pain and guilt that have plagued him over the years. It’s a song out of step with the rest of the album, but one that offers hope and the sense of a new chapter. Presumably, he’s got the next book lined up, it’ll be interesting to see what a free Mark Lanegan makes of the world. For now however, the sheer honesty of Sing Backwards And Weep and Straight Songs Of Sorrow can only be saluted, both are fine additions to the Lanegan canon.