Mark McGuire – Along The Way 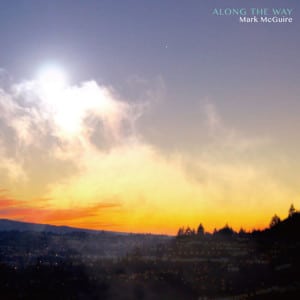 Emeralds were a band continually recording and exploring quite the assortment of musical avenues. Much of their improvised material found itself on numerous self-released CD-Rs and cassettes, but it was 2010’s Does It Look Like I’m Here? that got them wider attention with its Robert Fripp and Brian Eno inspired pieces.

With Emeralds no more, former guitarist Mark McGuire is following up his 2011 solo album Get Lost with something inspired by the works of Russian thinker PD Ouspensky, who advocated the ‘Fourth Way’ line of thinking in which you travel towards the ultimate goal of being in ultimate harmony with your mind, body and emotions: a sort of high consciousness. Rather deep.

But an album influenced by someone advocating spiritual harmony means that McGuire’s background with Emeralds was always going to be heavily suited. The Eno influences are clear from the outset but Boards Of Canada can be heard as well, with second track Wonderland Of Living Things sounding like something from 2006’s The Campfire Headphase thanks to its trippy downtempo beats and all-round ambience, coupled with gently picked guitar.

This is taken further with following track In Search Of The Miraculous, which certainly has that higher consciousness dreamy feel to it, while also reminiscent of William Tyler‘s highly acclaimed Impossible Truth from last year thanks to McGuire’s intricate guitar work. Meanwhile, To The Microbes (Where Do I Go?) initially has a hazy, drowse inducing feel to it as vocals and subtle bass drone in the background beneath slight sounding tones, before uptempo drum sequences bring it to life and contrast well against McGuire’s once again intricate guitar. This then leads seamlessly into Astray, which has a refreshing mix of the acoustic – particularly piano – alongside the occasional thudding beats and smooth waves of synth. Again, very Eno.

However, it’s at this point where Along The Way begins to labour somewhat despite its intent and obvious attractiveness. Silent Weapon (The Architects Of Manipulation) is essentially a five minute long Music For Airportsesque intro for the 12-minute The Instinct, which has very well planned and effective guitar sequences intertwining, before subsiding into a cocktail of soft-sounding programmed loops, drum beats and – once again – sophisticated guitar playing. All very pleasant, but coupled with Silent Weapon it all feels rather long-winded and uneventful.

The Human Condition (Song For My Father) is emotionally tinged, with samples taken from a family gathering alongside appropriate sounding low-tempo rhythms, which nestle in the background as the family laugh and enjoy one another’s company. During one sample, the family member says: “Thank you for bringing us all together tonight, thanks for all the hard work that went into this, good food and especially the camaraderie…” Sentimental and touching, but also verging on the obvious. This is also the case with For The Friendships (Along The Way), an eight-and-a-half minute long piece that is on the one hand affectionate and full of cheerful sounding high-tempo beats, but on the other sounding exactly what the title suggests it should sound like.

Album closer Turiya (The Same Way) – which is Sanskrit for the Hindu philosophy’s equivalent of the Fourth Way – is also, while decent, quite predictable, with its mystical sound and haunting vocal masked by the almost frenzied, almost ecstatic sounding textures.

However, when you consider the album as a whole, it is an appropriate conclusion; in some respects, McGuire wants to take you on a journey towards this state of supreme harmony and this represents reaching that moment, with each song a step along the way. In many respects, the intent behind Along The Way is admirable indeed. Many plus points, then; even if just some variation wouldn’t have gone amiss. Much like Emeralds’ back catalogue.