Mark Owen – In Your Own Time 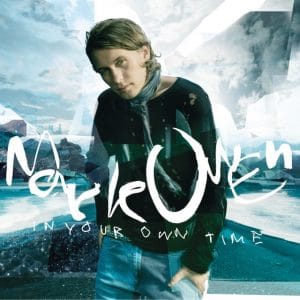 Whoa, I’m gonna get some stick for this one. I can see the headlines now in the The Vik & His Mates Telegraph: “Metalhead admits to secret liking for ex-Take That man’s solo album.” “Mark Owen seen nestling alongside Metallica in rock journalist’s alphabetically-arranged CD collection.” “Music editor sentenced to six months’ incarceration with Busted on continuous playback.”

Problem is, In Your Own Time, the aptly-titled second solo album from Take That’s icklest member (given that it comes seven years after his first, Green Man), is actually not terrible. Okay, it’s not bad. Well, if I was pushed I’d say it’s got some reasonable tracks. Oh damn it, it’s rather good… Throw me to the lions!

Yes, it’s ultra-mainstream and perfect for radio; a meticulously packaged set of 13 verse-chorus-verse-chorus numbers that sometimes fade out unnaturally just so they can clock in at under four minutes a track. And yes, this album is not without its lame donkey moments, especially the sloppy, self-pitying acoustica of Baby I’m No Good where everyone’s favourite Celebrity Big Brother bemoans his own infidelity.

But, close your eyes, forget this is the man who used to do promo shots half-naked in bed with four other ripe-for-gaytime TV men, and you could be listening to a talented Mancunian singer / songwriter who’s clearly been listening to Jeff Buckley. And I don’t mean Tim Burgess.

In Your Own Time is as distinct from the majority of pop claptrap as Cher’s body is from the way nature intended it. The likes of Close To The Edge and album-closer My Life feature lush orchestral strings that add depth to the otherwise conventional, though very well-written song structures.

Owen also gets edgy in some of the tracks in a way that sounds natural rather than contrived. Crush has an electro intro and guitars that have some of their sting left in them, while Kill With Your Smile is a dark pop song that belies Owen’s cuddly image (and has the F-word; how did the record company let him get away with that?!).

Furthermore, Owen isn’t just singing about relationships, although when he does, as in current single Alone Without You and Head In The Clouds, he knows how to pen a wry line (“Said I’m the worst thing she’s ever done / And so is my cooking.”). Pieces Of Heaven, for instance, is a decidedly non-cheesy, pensive song about searching for meaning with more background strings complementing Owen’s eminently listenable voice as he asks the rather astute rhetorical questions, “Where do words go when they’re spoken? Why do some minds never open?”

Meanwhile, former single Four Minute Warning is one of those songs that grows on every listen and is way cleverer than it first appears. Addressing the subject of what you’d do if there were only four minutes left before the end of the world, the lyrics (“Four minutes left to go,” down to “Thirty seconds left to go”) match the countdown of the song, while the cool harmonica and big, sunshine choruses steer it high into the groovy pop stratosphere (did I really just say that?).

Ironically, the tracks co-written with former Take That buddy Gary Barlow, Turn The Light On and If You Weren’t Leaving Me, are two of the more anodyne numbers here. To these ears this shows that, while Owen needs switched-on producers to maximise his potential (and working with the likes of Arthur Baker, Ian McCulloch and Danny Wilson‘s Gary Clark was a move that was more than a little smart), he should trust in his own songwriting skills a little more than maybe he does already. And with that, I’m off to change my name by Deed Poll…