by Helen Clarke
published: 26 May 2014 in Album Reviews
Tweet 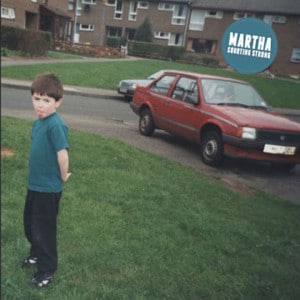 On paper, Martha are almost instantly dismisable; vegan, straight edge kids from Durham whose debut album, by their own account, is about “growing up weird”. They sound like a sixth form project taken too far.

But get past the paper, give them a listen, and there’s heaps to enjoy. Their melodic guitar pop and charming, deliberately naïve lyrics are truly infectious. They’ve been straddling the indiepop and pop punk scenes for some time now, playing alongside bands in the latter, but adorning the t-shirts of countless people at indiepop festival Indietracks last summer.

The pop punks might be feeling slightly resigned to losing them to ‘the other side’ since they signed to Fortuna POP! (home to the likes of Allo Darlin’, Joanna Gruesome and Flowers) – in the process folding band member J Cairns’ label Discount Horse, which released the band’s earlier efforts – but it seems that, with Fortuna POP!, they’ve found if not an entirely natural home, a nurturing one. Courting Strong is a…well, very strong record. It could be filed neatly between The Buzzcocks, Tiger Cats and The Wedding Present; furious, chunky guitars, brattish, clumsily delivered vocals and bouncing bass that goes exactly where you want it to. It’s a notch up from their previous EPs; a more assured sound that tightens up the loose bits.

There’s an overwhelming youthfulness to the album; it’s a sort of coming of age record which feels like reading 10 years’ worth of the band’s diaries. It’s packed with memories, anecdotes and the sort of confused tales that linger in friendship groups for decades. As Nathan explains in the album’s accompanying press release: “There’s the old cliché that when you’re young you think you’re invincible and that everything will last forever – the album is about looking back and reflecting on past moments in your life, past friendships and relationships, accepting the uncertainty and fragility of those things and moving forward positively.”

But that shouldn’t be confused with nostalgia; it feels urgent and very in the present, despite its lyrics being stuck back by the school lockers. “I would swap my wendy house for your spud gun any day,” reckons bassist and sometimes singer Naomi  in Sleeping Beauty, while she goes on to reminisce: “We met when we were seven, now we’re both in year 11/Boring! School is totally boring/ These GCSEs totally get to me, I long for your company” in 1997, Passing In The Hallway.

Courting Strong’s best moments come courtesy of Bubble In My Bloodstream, a woozy, Weezer-ish track which Naomi’s heavily accented vocals polish to near perfection. Meanwhile, 1967, I Miss You feels like an old classic, all clattering guitars and anthemic sing-alongs.

That’s not to say there’s no darkness lurking behind the chirpy mosh-alongs; Gin And Listerine looks to down beat early ’90s fuzz-pop to inform its tale of a misspent youth spent lurking outside an offie : “Tears and arguments, something to do with a missing bag of diet pills and superglue…”; while Move To Durham And Never Leave is a venomous account of feeling left behind while everyone else moves on and grows up.

Courting Strong is everything both Fortuna POP! fans and those who’ve been keeping an eye on one of its best live bands will have hoped for; it’s weird in all the right places.