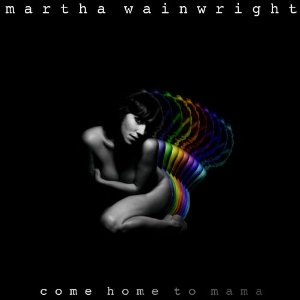 It’s become a cliche to describe someone as having been on an emotional rollercoaster, but it’s an appropriate one for Martha Wainwright. In the four years since her last studio album, I Know You’re Married But I’ve Got Feelings Too, she’s got married, had a baby and lost her mother Kate McGarrigle to cancer.

It’s these extremes of emotion that are explored on Wainwright’s third album, the third to be released by a family member this year. Even the title has a poignant double meaning – and, while it’s no surprise to hear someone who’s always been a particularly personal songwriter, the emotion is, at times, especially raw.

Take Proserpina for example – it would be one of the saddest and most beautiful songs you’ll hear all year, even if you didn’t know the back story. A fragile, piano-led ballad with some haunting choral backing vocals, it features one of Wainwright’s most touching vocal performances. When you learn that it’s the last ever song written by Kate McGarrigle, with that album title repeated in such a frail way, it’s impossible not to shed a tear.

Thankfully, not all of Come Home To Mama is as emotionally devastating as Proserpina, or it would soon become very difficult to listen to. In fact, the album strikes a successful note as a mixture of the intimate, slightly unsettling acoustic folk of her debut, and the more straightforward commercial pop sheen of the follow-up. She never drops that trademark honesty – as on Can You Believe It, where she laments “I really like the make-up sex, it’s the only kind I ever get”.

That honesty is all over the opening track I Am Sorry as well – perhaps one reason why Come Home To Mama was produced by Yuka Honda as opposed to her usual collaborator, husband Brad Albetta. “The seven year itch is quite a bitch, it’s true….to believe in you, to really believe in you, it’s hard to do” wails Wainwright as a maelstrom of instrumentation rages around her. It’s unsettling but compelling. Radio Star employs a similar musical technique, starting off with a guitar riff uncannily close to Pink Floyd‘s Another Brick In The Wall, before slowly and intensely building the tempo, until it builds up to a fever pitch towards the end. It should sound stunning when performed live.

At other times, Honda creates a more relaxed atmosphere for Wainwright to flourish – the languid Some People, with its quirky little electronic effects dotted all over the song, or Leave Behind, which sounds deceptively dreamy at first, but soon paints a portentous picture, with lyrics referring to “the levees are going to break” and an unspecified “danger on the way”. As on most of the tracks, Wainwright sounds terrific, her voice swooping and hollering at times, and quietly understated at others. No matter the tone though, the emotion is always unmistakeable.

Nothing quite prepares you for the heartbreakingly sad All Your Clothes though, which sees Wainwright talking to the spirit of her late mother, sharing that “the baby’s doing fine, my marriage is failing but I keep trying” and worrying that “you can’t hear music anymore”, imagining McGarrigle’s spirit being channelled through a Dr John song – “you played it through his fingers on the piano”. As raw and sad as Proserpina but in a totally different way, it’s a beautiful depiction of tackling and coping with bereavement.

Everything Wrong brings the album to a close, and it’s another desperately moving song, but this time laced with hope, as it’s addressed to Wainwright’s son, covering the circle of life and how values pass down from generation to generation. It’s a fine way to end Wainwright’s best album to date – though given the circumstances it was written and recorded though, let’s hope she never has to make another one like it.