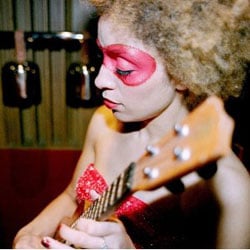 According to some, variety is the spice of life: the more we allow ourselves to experience, the more we enrich our existence. This clearly holds true for the queen of collaborations Martina Topley-Bird, whose third album Some Place Simple is arguably her most accomplished to date.

But this time round, Blur/Gorillaz lynchpin Damon Albarn encouraged the London-born songstress to strip some of her previous works back to basics after seeing her perform with Massive Attack in Brixton last summer, and releases the resulting collection of new recordings through his label Honest Jons.

Topley-Bird’s eclectic mix of muses and musical friends down the years, among them Mark Lanegan and Josh Homme of Queens Of The Stone Age, has enabled her to develop a varied and dedicated fanbase. But, different to anything she made with Massive Attack and ex-partner Tricky, this 15-track album features reworkings of the very best of her debut Quixotic (2003) and its long-time-coming Danger Mouse produced sequel The Blue God (2008).

The opener sets out the shape of things to come. It’s a much purer, decaffeinated, acoustic version of Baby Blue to that which originally appeared on The Blue God. Accompanied by delicate glockenspiel and folk tambourine, it serves to magnify her whisperingly haunting vocals. Phoenix, Lying and Da Da Da have all undergone similar makeovers, stripped of overly produced polyphonics and replaced with subtle keyboard parts.

But, unlike Suzanne Vega‘s recent acoustic reworkings of her back catalogue, Topley-Bird’s latest is not all about reinterpretation. Not long in we encounter Orchids, the first of four new tracks written especially for the album. It’s a floaty, catchy number in which the vocals rise and fall before hooking the listener with a catchy, lingering chorus. Only the mere suggestion of keyboards, accompanied by carefully positioned hi-hats, exhibits Topley-Bird’s vocals at their best.

Another new one, All Day, is foot-tapping, upbeat 1930s-style swing ditty. It sounds as free and easy as a warm-up jamming session at Studio 13, typical of an album that sounds at ease with itself and, as indicated by its title, opts for simplicity over complication.

Similar to a diva being photographed without make-up, this is a raw and unforgiving exercise that few artists would be brave enough to attempt. But Topley-Bird positively glows throughout, elevating herself not only to ‘some place simple’ but to the all important next level of her career as an established solo artist able and willing to make her own way without relying on collaborations. Variety, it seems, would include one’s own company from time to time.