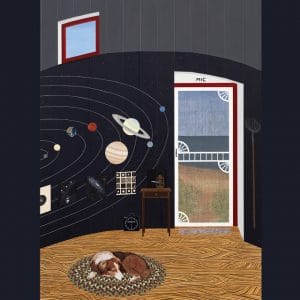 Have you ever thumbed the racks of a record store and picked up a release, hesitant of the contents, but somehow drawn to the strange allure of the frontispiece, enthralled as to what could hypothetically lay within? What would you make of this particular cover with its charmingly naïve Becky Suss painting of a beachfront interior, the wood paneling decorated with charts and maps of the universe, whilst a faithful hound naps contently in the afternoon sun?

Is Mary Lattimore an astronomer creating celestial tones from within familial spaces? Is that a Geiger counter placed below the snuffed out oil lamp a warning to us about the dangers of industrialisation and he erosion of fossil fuels upon the landscape? Where has she disappeared to?

Perhaps you’d see the visual cues comparative with 2018’s Hundreds Of Days LP, itself another artwork by Suss, this time a formal living room in an unspecified suburban enclave, filled with academic bookshelves, antique plant illustrations and posters of prehistoric sculpture. You’d maybe hazard a guess that classically trained harpist Lattimore was a somewhat introspective artist hungry for knowledge, surveying her surroundings and conceivably hindered by the stifling provocations of domestic expectation.

With the temperate harp thrums that chime through Pine Trees, the tone of the record is distinctly established. Recorded in the Cornish countryside at the Newquay studio of Slowdive’s Neil Halstead, the restorative influence of time spent in nature, a clement, balmy tone infuses proceedings with wordless serenity as a breeze of bowed strings swirls the air and soft electronic waves lap at its shore. The restraint and considerate proficiency that has characterised Lattimore’s work to date is omnipresent but an amiable new sense of liberation is emerging. That placid sentimentality continues into Silver Ladders, a cloistered sonnet once more woven with grumbling surges of analogue synth whilst the harp shimmers and hangs delicately in the atmosphere.

For all the apparent awe at the physical world, there is an awareness of the primal influence of the elements, and the whispered folklore of Cornish legend. The middle section of the record imparts a caution to listeners. On ‘Til A Mermaid Drags You Under you can feel the portentous repercussions of some haunting (super) natural event as swells of hypnagogic synth rumble and prowl beneath the surface. Reminiscent of the digital bucolic pathways envisaged by Beverly Glenn-Copeland on his early ’70s and ’80s self-released records, the misleadingly pleasant Sometimes He’s In My Dreams finds Lattimore looking outwards across the horizon, temporarily forlorn as she reflects on the brittle impact of historic relations. Elsewhere, Chop On The Climbout, inspired by a warning heard whilst travelling a small craft on the Atlantic sea, starts steadily before dark billows of sputtering digitised keyboard start to reverberate and disturb the calm.

The iridescent squall that threatened to capsize the record shows signs of dissipating by the time we arrive at the penultimate Don’t Look, as all traces of disparity fade away and the reassurance of safety comes into view. With closer Thirty Tulips, a familiar warmth wraps the listener as the music comes indoors, and once more we find ourselves comforted by the muted sensory pleasures of the interior.

So much of the delight of listening to music comes from the lyrical, our tacit affiliation with the rage, wit or pathos an artist wishes to project. This record goes some way to appropriate the perception of being wordless, hushed by the beauty of the world we inhabit. A keen collaborator, Lattimore recently worked alongside downtempo funksters Holy Hive, producing easily one of the year’s standout tracks in Oh I Miss Her So, where folk infused beats complement forlorn lyrics about the lament brought about by the loss of a girl who loves “the sunshine on her face” and “wants to fly far away to a bluer sky and sunny days”. It appears on Silver Ladders that Mary Lattimore got her silent wish.