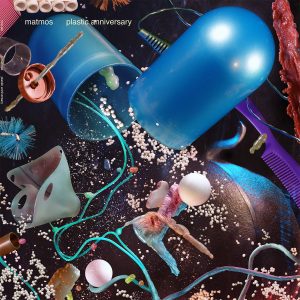 Plastic, in so far as it connotes the artificial, is in many circles an insult. There is a struggle for the authentic, a perception of the real and the faux that prizes music that can be described as ‘rootsy’, and for a time this permeated alternative electronic music – remember folktronica? But since then there has been an embrace of the synthetic, with artists like SOPHIE and Jlin transforming the zeitgeist to such an extent that working with foley could be seen as old-hat. This is where Matmos come in, a duo that have been constructing weird and wonderful soundworlds from unlikely sources for 25 years, hence the eponymous anniversary.

Squeaks, clicks, creaks and rattles abound on Matmos’ tenth studio album, a good example of this being The Crying Pill, in which exercise balls are synthesized and harmonised to form bass music as it’s never been heard before. Elsewhere the nasal buzz of a duck call is used for a more discordant effect on the climactic penultimate track Collapse Of The Fourth Kingdom. It’s reminiscent of the online meme in which rubber chickens are repurposed as surprisingly versatile instruments, and the same sense of play and imagination is evident across Plastic Anniversary.

Breaking Bread is a jaunty opener, utilising fragments of vinyl and creating a moombahton groove out of them with a cheerful ostinato, other more intricate rhythms made from smaller samples skittering over the top. More eerie tones come from Interior With Billiard Balls & Synthetic Fat, the uneasy melodies and glitchy percussion coming off very Autechre-esque as the two very different sound sources intertwine almost seamlessly. The track threatens to cave in on itself near the end, squelchy noises taking over and dissolving into a digital maelstrom, but reassembled in the last 30 seconds for a more subdued finale.

If the use of fatty tissue and a sillicone gel implant (as in the song of the same name) brings back memories of 2001’s A Chance To Cut Is A Chance To Cure, the title track revisits some textures from The Civil War. Pads that sound distinctly like brass instruments combine with a plastic flute, plastic ocarina and plastic bodhran to create what could be seen as the emotional core of the album. Much as 90s electronica melded evocative chords and melodies with frenetic percussion, the combination merely emphasises the impact of the two seemingly disparate elements, creating a powerful centrepiece.

Running counterintuitavely to plastic’s ‘fake’ reputation, one of the most basic and integral methods of music making features on multiple tracks: hand-drumming. It is present on the abrasive Thermoplastic Riot Shield, merging with the programmed bangs and squeals, as well as on Fanfare For Polyethylene Waste Containers where it is paired with a mopey motif, less a fanfare than a foghorn dirge. The closing track, Plastisphere, removes all the bustle of the previous 35 minutes, leaving just unsettling ambience, rustles and pops and crinkles and sizzles, a field recording of a hypothetical but truly desolate landscape.

Matmos often fall victim to music writing’s innate bias against consistency; reviewers and journalists are a lot more likely to award ‘album of the year’ to a grand comeback than they are to an act that has been producing quality work non-stop for years and years. But that Matmos’ astounding sound design, infectious creativity and awe-inspiring commitment to seeing through a conceptual vision is not surprising is merely a testament to their brilliance. Plastic Anniversary is yet another masterwork by a duo that have been on the top of their game for longer than some producers have been alive, and long may their reign over sample-driven electronica continue.