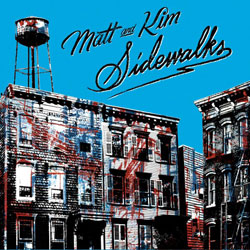 There has always been a proud sense of place in the work of Matt & Kim, particularly on their last record, Grand from 2009. They were doing this ‘singing about where you come from’ shtick long before Arcade Fire made it popular with The Suburbs. And now the Brooklyn-based duo return with another LP referencing their roots. The name Sidewalks, and its cover art, instantly tells the seasoned listener that they’ll probably know what’s coming.

As they grow as a band, their songs are sounding bigger and grander than ever. AM/FM Radio is a bouncy song that’s almost been tailor-made for the format Matt Johnson is singing about. The hooks are pretty much here, there and everywhere on Sidewalks, particularly where you’d least expect; Good For Great is boosted right towards the end with its repeated mantra (“We sing along but the words are wrong/We sing along through night and dawn”) that drives it home.

But one of the most noticeable aspects of their sound is something that leaves one wondering: Where did Kim go? Anyone who’s seen the duo live might be surprised at how much electronic beats dominate, as opposed to organic sounding percussion. It’s hard not to think that Kim is vastly underused, especially given what she provides for their songs – a wild and energetic style of playing without dwelling too much on intricacies. Hopefully her skills will come alive more when these new songs get a live airing.

Speaking of tunes, when the songwriting chops are at their peak they are glorious. Cameras, the lead single, mixes its hip-hop-esque beats with a playful sense of rebellion and adventure (“No time for cameras, we’ll use your eyes instead”) and Red Paint is the kind of hyperactive and super-charged burst of pop that won fans over in the first place.

On the downside, there are moments where the momentum starts to lull. Where You’re Coming From, the longest song at four minutes, feels especially repetitive and, by the end, rather worn out. Meanwhile, Northwestern starts out with Johnson singing over contemplative piano chords and tambourine before it gives way to an instrumental passage that, whilst not entirely unexpected, doesn’t really add anything; it’s almost like it’s been tacked on to give it some form of completion.

For a record that veers between hit and miss, there is a certain amount of charm and vibrancy that keeps one coming back for more. It’s not as organic as it might have been, but the likeable qualities far outweigh the negatives. In a way, it’s like the feelings one has about one’s home town – an equal mix of love and hate.