Matthew And The Atlas – Other Rivers 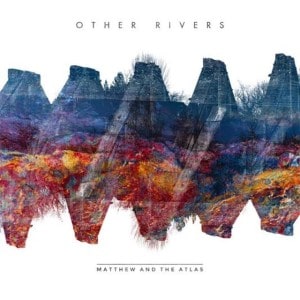 London based musician and part-time landscape gardener Matt Hegarty, the driving force behind folk-rooted Americana outfit Matthew And The Atlas, has sculpted a completely different shape to his music on debut album Other Rivers; as such, this long-awaited album marks a considerable career crossroads that will no doubt disappoint some fans but also draw in many others.

Whilst earlier EPs focused on a folky, acoustic banjo-heavy sound, the new offering has been heavily influenced by producer Kevin Jones who introduced Hegarty to the wonders of Apple’s Logic software. This results in a considerable shift towards Moby-like electronica based soundscapes, with vocal melodies sitting prettily on top like fancy icing on the sweetest of baked delights.

A couple of album tracks have already appeared – Out Of The Darkness and Everything That Dies – so fans have a fair idea of what to expect from the album. A bleak keyboard line opens the former, a sparse opening that elevates the rather shy and humble Hegarty’s really rather stunning vocals, the track then developing into something almighty through the introduction of a basic guitar riff and washes of synths to create a shimmering, almost shoegaze backdrop in places. The latter begins sparsely once more, sublimely layered vocal harmonies virtually unaccompanied before delicate piano arrives; the track may evoke sadness through its sonic construction but the repeated message of “you said everyone you know one day will surely die, but everything that dies in some way returns” somehow instils belief within even the most ardent of disbelievers.

A compelling video starring acclaimed actor Charlie Cox accompanies the first official single from the album – Pale Sun Rose – with trademark banjos making a rare appearance to great effect. Hegarty’s vocals often bear resemblance to Cherry Ghost’s Simon Aldred and that’s evident here, helping to create another highly enjoyable cut. To The North is a new take on an older, folky effort that opens to a constant keyboard sequence permeating throughout but the male/female vocal harmonies of the original cut remain and are quite simply spine-tinglingly fantastic.

Album opener Into Gold and Counting Paths are possibly the most captivating tracks on the album. The former begins with more minimalism, floaty synths and a pulsing beat that drives the track forward before being joined by tambourine, banjo and stunning goosebump-creating synth chords – it bears all the hallmarks of a wannabe track of the year contender but frustratingly closes too soon. Strings open Counting Paths, leading to synth pulses and minimal percussion; gorgeous vocal harmonies then float above the perfect soundscape before simple, atmospheric piano chords hit the mark with Hegarty pre-empting fans’ views on the whole album by declaring “no one’s ever looked at me that way”.

Although the second half of the album drops away from the magnificence that has gone before it, there is not a weak track in sight. Old Ceremony replicates the sparse emptiness of much of the album with more electronica adorning the captivating backdrop alongside more simple guitar riffing. Album closer Another Way aims for the clouds with acoustic guitar and remarkable falsetto backing vocals from Australian vocalist Matt Corby that lift the track to greater heights.

It’s a far cry from earlier material like the rollicking banjo-fest I Followed Fires from 2011, but in all honesty who wants another Mumford And Sons or even Ray LaMontagne. It’s become a rather saturated market and, with the ability to craft stunningly effective vocal harmonies and melodies still intact from their early guise, Hegarty’s music is so much more.

Matthew And The Atlas MP3s or CDs

Matthew And The Atlas on Spotify