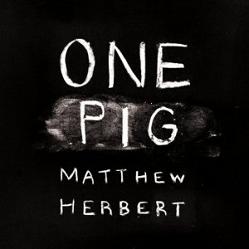 Not many albums are unsuitable for vegetarians, but Matthew Herbert’s remarkable new utterance should definitely come with a warning for them.

It is essentially a protest album, rounding off the ‘One’ project – which, if you haven’t been keeping up, is Herbert’s triptych of highly original album settings. One One charted a day in the life of the artist, and One Club spent a night in the Robert Johnsons club in Frankfurt, both albums using location recordings as the fundamentals for the music that followed.

By now you know where this is going – and yes, One Pig spends a life with a pig, from birth to slaughter – and it’s a no holds barred account, given by a selection of sampled field recordings. The squeamish amongst you might want to listen away as we get the air being released from the lungs of a dead animal, the squeals of a pig bound for slaughter, and the industrial clanks and crashes that go with them. Happily Herbert remembers that these animals are among the funniest on earth – and nowhere more so than the moment when he thought he had finished recording, only for a pig to relieve itself continuously for two minutes. So when we refer to this being a recording that takes the piss – well, it really does.

So how does this work in musical terms? It proves somehow possible to enjoy this record – if ‘enjoy’ is the right choice of word for such a stark reflection on animal butchery. Each track works as part of the timeline, with no clues on the content save the name of the month, so there is little to prepare the listener for what lies in store. There is a strange, reserved euphoria to October, with its fuzzy chord shifts, but elsewhere the sounds are less easy to contemplate – in November and December sudden crashes and industrial comings together suggest a life of constant stress for the porkers involved.

There is an uncommon degree of emotion here, too, especially when you realise what is being recorded, and the underlying dread of the animal’s progress towards slaughter is difficult to ignore, like a Hugh Fearnley Whittingstall program minus any semblance of happy ending. For when the end does come, after a plaintive song from Herbert, it is marked with a minute’s silence in the company of 50 or so animals, the end of a strangely moving contemplation. The minute’s near-silence at the start of August 2009, meanwhile, is a live recording of the birth. Both add to the depth of feeling, as do the little grunts of the wieners as they rush about the sty. Out of context the noises are strangely comforting – in context they only add to the disquiet.

Only Matthew Herbert could conceive and execute – if that’s the right word – such a program with such clinical actions and acute observation, and he manages this without the use of a single word. The subtitles are there for all to interpret, and they speak powerfully of clinical world processes as well as about animal rights and wrongs. As an end to the One trilogy it is a remarkable piece of work – and can only lead to a final question. Where next?