by Clair Whitefield
published: 29 May 2006 in Album Reviews
Tweet 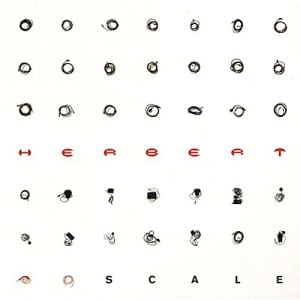 Matthew Herbert is surely electronic music’s most prolific and admired practitioner, not to mention a sampling wizard. With one eye keenly on the world around him and the other on the studio, he produces work which is flamboyant, daring and politicised. Listening to his latest album Scale is like taking a high speed train through a land where the scenery is always changing – it’s heady, captivating and you don’t want it to end.

A subversive boundary breaker, Herbert likes to take risks, meaning nothing can be ruled out for possible sampling – the contents of his session singer’s handbag and the rustle of a humble crisp packet have all been plied into service on his tracks over the years. And Scale is no different – the album cover pays homage to some 32 of the 723 unusual and bizarre items like petrol pumps, answering machines and coffins that have been audio-grafted to make this utterly unique and inspiring album.

A classically trained pianist, Herbert mixes these intriguing samples, which also include the sound of someone being sick outside a notorious London arms fair, with a big band, a chamber orchestra, a wood wind section and a French horn, to give style and substance to his quirkiness while the lyrics merge the playful with the political and wage war with the end of the oil era (and the ends we will go to secure this fossil fuel), celebrity, and the false trappings of the digital age.

The first track, There Must Be Something Wrong, features the beautiful voices of Herbert’s long time collaborators Dani Siciliano and Neil Thomas. It has a strong disco funk flavour to it, as does The Movers And Shakers, with its evident critique on current global-political conflict, looking at how this “holy mess” could generate “love at war”. Move Like A Train follows a similar disco groove while Harmonise also features the haunting silky voice of Siciliano – it has a staccato, bumpy melody and will stick with you.

Those Feelings again features Siciliano’s strong, complex, female vocals which bring to mind Moloko, but this isn’t too surprising as Herbert produced Roisin Murphy‘s debut solo album. Down has a haunting, harrowing quality, like a sedated Portishead but mixed in with lyrics that are spat out to match the boisterous nature of some of 4 Heroes more belligerent tracks, it’s a kind of toxic lullaby, that feels like the sound of stars falling.

Movie Star has an instrumental intro that you might find in a classic black and white detective film. It’s a scathing critique of celebrity and cult of self-improvement evinced in the biting refrain “cutting the bits you don’t like out/off”. The last track, Wrong, is exceptionally brief, but watch out for it as Herbert sings on it.

Inspiring and ingenious, this is an album you shouldn’t be without and what’s even better is that it gives away more and more of itself every time you listen to it.