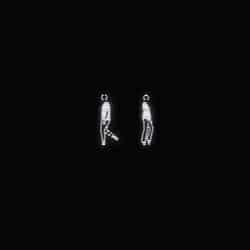 Max Richter is the rare classical composer, who somehow fits right into the postmodern musical landscape while dealing in a medium that seems to only reach a mass audience when applied as background music in films. In the case of Richter’s latest, Infra, the genesis came in the form of a ballet based on TS Eliot’s The Waste Land, and commissioned by the Royal Ballet as a collaboration between Richter, choreographer Wayne McGregor, and visual artist Julian Opie.

But to call it a soundtrack is to diminish Infra’s scope. The album plays out its own cinematic vision without the need for visual crutches. While the McGregor’s dancers and Opie’s projected visuals probably contributed in their own way to Infra’s emotionalism – it’s hard to say without having seen a performance – the music herein stands on its own.

“I started thinking about making a piece on the theme of journeys,” Richter said in the album’s accompanying promotional material. “Like a road movie. Or a traveler’s notebook. Or like the second unit in a film – when the scene has been played, and the image cuts away to the landscape going by.” Indeed, the sense of travelling over a bleak and windswept landscape is overpowering.

Initially, McGregor requested 25 minutes of music from Richter to accompany his ballet, and the two developed a distinctly collaborative relationship, McGregor asking for sections to be adjusted to fit changes in his choreography. The resulting album – made up of music composed for electronics, piano, and a string quintet – encompasses the whole of the performance score as well as subsequent pieces to extend the original idea.

The album’s principal recording took place in a single day at London’s AIR studios, and the product is something of a marvel. The analogue tape provides a markedly non-modern warmth – especially in the days of the digitally downloaded, computer-recorded track that’s never existed in a physical medium. And sonic space is conveyed beautifully, creating a jarringly immersive depth of field.

Electronic noise – feedback, radio hum, Morse code – is injected into the musical soundscape, at once detracting from and calling attention to the stark beauty of the instrumentation. It’s a fitting metaphor for modern life: Here we have sweeping vistas, and here we have white noise. But listen; occasionally the chamber music makes its way through the static to tinge it with a solemn and indomitable beauty.

There are no song titles here, save for numbered Infras and Journeys. Much like Sigur Rós‘s (), Infra defies vocabulary; to ascribe individual titles to these pieces, which careen wildly between majestic beauty and peaceful reticence before being swallowed up in static, would be like trying to understand colours in a purely intellectual sense.

Most striking about Infra is the lyrical quality of its music, the way Richter conveys such complex emotion on the backs of such minimal composition; not dissimilar to the work of fellow McGregor collaborator Ólafur Arnalds. One cannot listen to Infra without feeling something, whether it be a melancholic sadness or a quiet, hopeful joy. Despite its origins, Infra stands as a staggering achievement, and as an album in its own right.