Max Tundra – Some Best Friend You Turned Out To Be 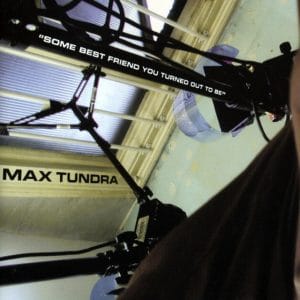 Max Tundra, a minutely-framed chap also known as Ben Jacobs, has released his second album of experimental electronica. No longer with Warp Records, he now moves to Domino, from where he unleashes more of his unique madness upon the unsuspecting Earth.

This is no ordinary record but instead sounds like what would happen if you tried to fit every sound ever into one album, via experimenting with seeing how quickly you can make a sequencer explode. One critic described Max Tundra as someone trying to “make free jazz inside a washing machine… a fast-forward splatter of split-second sound samples, which is quite funny but mostly just insane”. It is hard to find fault with this statement when presented with Some Best Friend You Turned Out To Be.

Track three, by way of example (called Ah, There’s Deek Now, Let’s Ask Him), is perhaps the only recorded ‘music’ ever to include a Nokia tuning signal as it’s main percussion, overlaid with steel drums and ancient analogue keyboard sounds. Scarily, it all works.

Where other acts draw near, such as Magnetophone or The Chemical Brothers, is bizarrely in the more relaxed moments, but where they sustain a concept for a warming amount of time, Jacobs throws the listener around the room with recording speed changes (The Balaton), random sample placings and unexpected volumes and sounds throughout.

This is music to engender a veritable plethora of reaction – and it is fair to say that you will either love it or hate it. One brave acquaintance of mine labelled Jacobs as “a music terrorist” and the album “unlistenable”, while another told me that “it was….. different, like, out there somewhere, like Aphex Twin misbehaving”.

On a stage, Jacobs is fun to watch as he tootles, strums and hammers his way around a bewildering collection of devices, and while some of the fun of his live shows comes aross on this album, it is difficult to hear out in one sitting. But let’s face it – if he wanted to be a Simply Red tribute band, rather than produce off-the-wall weirdness, the UK electronica music scene would be the poorer for it.