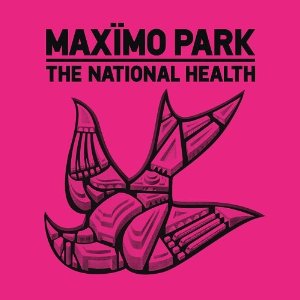 Reviewing an album is a little like being kidnapped by it. For a few traumatic days, the reviewer depends on it for their musical sustenance, comforted by the thought that on their (and its) release, he or she will finally be able to speak freely.

If the kidnapper leaves a bad impression, his or her name will be dragged gleefully into the gutter – not because the reviewer delights in causing pain, but simply wishes revenge on the perpetrators for keeping them captive for so long in such insanitary conditions. But if all goes well, a kind of Stockholm Syndrome will set in, and the released detainee will breathlessly repeat their captors’ arguments for greatness to anyone who will listen. Or in extreme cases, do a Patty Hearst and join the street team.

Maxïmo Park‘s arguments for actual greatness have never quite hung together, and The National Health does little to alter this. But it is certainly the most argumentative of their albums so far; the title track is a feast of frantic statements-of-the-nation lines like “England is sick and I’m a casualty” (the fact that he “heard it through the tinny speakers on a cameraphone” suggests strongly that this nationwide portrait was filtered through the top-deck windows of a rush-hour bus) that are unconvincing at best. Meanwhile, they mutter darkly of “pixellated punishment” on Banlieue, all monotonous portent and pretence.

But Maxïmo Park’s most persuasive quality has always been their simple charm. They’ve never been a band to break much new ground, either for themselves or their genre, but their breezy delivery and Paul Smith’s charismatic vocals set them apart from more standard indie fare. And when he forgets the rather forced social commentary and sings about what he knows best – the tentative beginnings and sticky ends of our relationships – it’s a winning formula. The two-note guitar riff and yearning, descending melody of The Undercurrents that emerges four tracks in feels like a relief. By the end, it’s turned into a triumph, slyly bringing the listener round to its melancholy viewpoint – “don’t pretend it doesn’t happen to us all”, he implores.

Reluctant Love, despite the worrying connotations of the title for their hostage, is another such bewitcher, with a infuriatingly familiar repeated figure that renders the plea for physical intimacy all but irresistible. But best of all is the wonderfully-titled This Is What Becomes Of The Broken Hearted, which brings the tempo back up while still retaining the unpretentious clarity of the more reflective numbers. It features a good three or four melodies that might make a song on their own, with a delightful piano figure underpinning the chorus.

Overall, it’s a huge improvement on previous offering Quicken The Heart, which confused complexity for not bothering to write more than two decent songs, and will please anyone who enjoyed Our Earthly Pleasures, their last near-brush with greatness. And thus, somewhere in Leeds, a damp basement with a single mattress and a discarded length of rope is being surrounded, and the battering rams are ready. But they’ll find no band there, just a strangely uncooperative hack holding a hastily-discarded hat fondly to his chest.