by John Murphy
published: 11 May 2009 in Album Reviews
Tweet 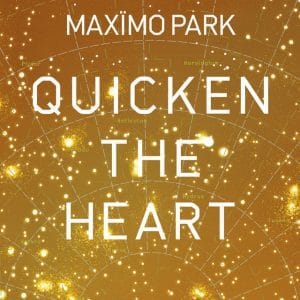 What a difference four years makes. When Maxïmo Park released their debut album in 2005, they were part of a musical vanguard emerging from the North East: sharply dressed, toting jerky guitar lines and broad accents, they, together with The Futureheads and Field Music, epitomised the region’s renaissance.

Since then, The Futureheads have been on a bit of a rollercoaster ride and Field Music seem to have more side-projects than new material. And although Maxïmo Park’s second album, Our Earthly Pleasures, had its moments, in truth it couldn’t live up to the near perfect debut Apply Some Pressure. So is it a case of ever-diminishing returns for Paul Smith and company?

Quicken The Heart, despite being recorded in sunny Los Angeles, certainly sounds a lot gloomier than its predecessors. While there’s always been an element of melancholy in Maxïmo’s music, this has often been balanced by a fizzling, kinetic energy which always made them of the more uplifting of the current ‘indie-guitar’ crop.

That energy seems to have been replaced by a sense of brooding, and a lyrical theme of despair and ennui dominates. The lead single The Kids Are Sick Again has the requisite singalong chorus, but hearing Paul Smith gravely intone about “pointless days” and “wasted lives” leaves the listener feeling a bit flat.

Yet they can still turn it on when they want – opening track Wraithlike is vintage Maxïmo, beginning with Duncan Lloyd’s staccato guitar line before bursting into infectious life. The sound of a siren wailing in the background just helps to add to the sheer exhilarating thrill of it all. It will, no doubt, sound terrific live.

The Penultimate Clinch is similarly impressive, although the opening chords do seem to be cribbed from an old Joy Division song, showing a worrying tendency to go down the White Lies and Editors route. It does have a memorable tune though, which is more than be said for tracks like A Cloud Of Mystery and Let’s Get Clinical, both of which just seem to drift by without making much of an impression.

We’re on safer ground with In Another World (You’d Have Found Yourself By Now) which starts off pacey and aggressive (“you’re looking so pleased with yourself, I’m gonna come over there and wipe that smile off your face” snarls Smith), before soaring into a glorious chorus which stays with you for a very long time.

The main problem with Quicken The Heart is the lack of decent songs – there’s nothing on here that can hold a candle to the likes of Graffiti, Going Missing or Our Velocity. While Paul Smith’s deep, rich vocals sound as affecting as ever (listen to the desperation in his voice on Roller Disco Dreams as he sings “I just want to kiss you”) but formless jams like Tanned just sound tired and a bit stodgy.

They will remain a formidable live proposition, but Maxïmo Park’s third album has to go down as a disappointment – especially given the band’s previous high standards.