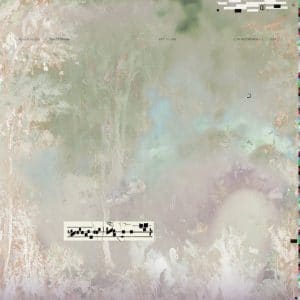 Following on from his uniquely personal debut Hollywood Medieval, which recontextualised his experiences living in California, and Laced With Rumour: Loud Speaker Of Truth which explored the Roman Empire and the Midlands’ once proud textile trade, Turn Of Phrase is uncompromisingly cobbled together from gentle abbreviations of time and antiquity.

Schizophrenic remnants of the neo-classical past can be glimpsed within the glitching modernist contours of Decay Time, the mysterious track that heralds the album’s surrealist arrival. Connecting the occult with the unconscious, it invites you to peer within Sterling’s spontaneous and fantastical fragmented inner mind. On the curiously hesitant Eris, uncharacteristically aggressive strings belie a vertiginous infatuation with Far Eastern culture and the writhing Exuding Latex, as expected, is a provocative electronic distortion bound by a strange fetishised animism. Rage Aria tentatively flirts with baroque trappings, but is surrounded by violent landscapes of techno clatter.

The flinching experimentalism of Tremble Happy and the echoing hallucinations of titular track Turn Of Phrase also contain overtones of harsh Detroit minimalism, but where the album is particularly strong is on the humanistic track Tenderness, impregnated by the legendary hedonist poet and fashion icon Leslie Winer’s sinewy vocabulary, as she juxtaposes her delicate observations and infinite torments, across Sterlings ingeniously primitive musical canvasses. Vestiges of incidents past and present inform the track’s exquisite philosophical dynamism. Increasing the scope of his aural schematics, and pruning away the conventional and the melancholic, Sterling has removed himself from the margins of history and placed himself centre stage, amidst the ruins.