Mazzy Star – Seasons Of Your Day 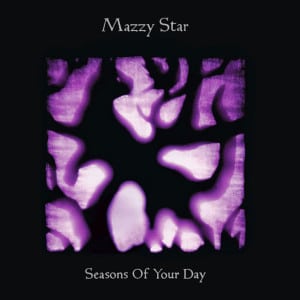 After what seems like forever, the unique talents of ‘goth-psychers’ Mazzy Star return with their first album since 1996’s Among My Swan. Seasons Of Your Day sees all original members appearing at various points with additional contributions coming from Hope Sandoval’s partner Colm Ó Cíosóig (he of My Bloody Valentine fame) on drums and the late Bert Jansch.

Formed in 1989, the California band made a name for themselves with their minimalist music, built around the haunting voice of Sandoval and David Roback’s guitar. Reaching their peak in 1993 with So Tonight That I Might See, which included their most famous and defining song Fade Into You, Mazzy claim never to have ‘broken up’, but it’s been one hell of an interlude between albums. Two songs here are actually ‘old’, having been released in 2011, at the time sparking disappointment when a full album failed to appear – until now, that is.

Sandoval has appeared here and there since, of course, most notably making guest appearances on other people’s records, with Dirt Blue Gene’s Not At All being a recent example from March of this year. She also sang on the less recent Jansch track from 2002, All This Remains, so this posthumous appearance by the Scottish folk guitar icon is a favour returned. Solo material has also appeared, with the Warm Inventions project producing album Through The Devil Softly, that provided more melancholic output for her considerable following in 2009.

Recorded in both California and Norway, Seasons Of Your Day opens with the organ chords and lazy slide guitar of In The Kingdom; it’s a stunning start, particularly from Roback, proving that Mazzy have lost none of their talent for creating atmospheric beauty, with its declining organ riff recalling Smokey Robinson’s Tracks Of My Tears.

I’ve Gotta Stop adopts an even slower pace, acoustic guitar this time creates the canvas for Sandoval’s vocal picture to be painted alongside an electric guitar that weaves in and out until an extended solo passage enables the track to climb new heights. More slide guitar forms the basis of Does Someone Have Your Baby Now, another track boasting minimalism with the lack of percussion bar the odd clashing cymbal, married with whispery vocals.

Common Burn is one of the older songs here, the subtle crescendo opening introducing more simplistic guitar, both slide and acoustic. Occasional harmonica breaks the (almost) silence of the track, interspersing with the most delicately laid vocals of the entire collection; this is the kind of track to encourage deep reflective thinking. The title track is another masterclass in acoustic pluckings with the gorgeous vocal melody being the only accompaniment as the minimalism continues in beautifully serene fashion, until subtle bursts of strings provide a further dimension to this delightful highlight.

Flying Low then appears courtesy of slide guitar before building into another bluesy, softly-softly Led Zep moment, so much so that Robert Plant’s strenuously applied vocals seem to be merely around the corner throughout its seven minute length. Acoustic (slide) guitar again leads the beautiful Sparrow into existence, with Sandoval’s vocals matching the plucking perfectly before a gentle spinet riff gives the track an almost medieval feel.

Bert Jansch then makes his appearance for a guitar duel with Roback that forms the basis of Spoon; Sandoval does her best to contribute tellingly but the guitars are clearly not going to be outdone in what is another defining moment, and she finally gives in, allowing the guitars to see the number out. The album is then completed by another of the older songs, Lay Myself Down; it’s a folky finale furnished with slide guitar and tambourine, and the chord sequence being a somewhat standard one doesn’t detract from another gem that finishes with the country tinged twanging of the slide guitar.

A lot can happen in 17 years, but one thing that doesn’t appear to have changed is Mazzy Star’s ability to produce beautiful, mesmerising tunes; there is less psychedelic fuzz than earlier efforts but the results are just as stunning. In a year of comebacks (see David Bowie and My Bloody Valentine amongst others) it is refreshing to hear Sandoval’s stunning vocals once again coupled with Roback’s guitars. The world is a better place for it.

More on Mazzy Star
Mazzy Star – Seasons Of Your Day