McAlmont & Butler – Bring It Back 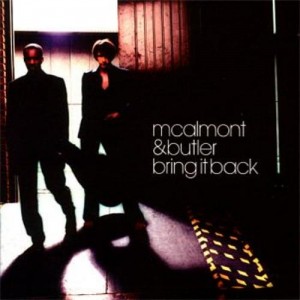 It was the reunion that no one was expecting. Their first album, The Sound Of McAlmont And Butler, met with no great interest, despite coming right in the middle of the Britpop era and containing the staggering pop epic Yes. And then, of course, there was the well-publicised rift between the quiet Bernard Butler and the flamboyant David McAlmont, as their differences caused the odd couple to fall out.

The split seemed permanent, as bothwent off to pursue their solo careers. Though Butler’s debut album People Move On won great acclaim, few people bought it, while the follow-up is now only to be found in bargain bins and charity shops. As for McAlmont, no-one noticed that he was actually still releasing material.

So, the failure of their solo careers seems to have brought about an enforced reconciliation in the spirit that things can hardly get any worse for either of them. Over the opening chords, we are told: “This is a recording, this is a microphone. The microphone is working and the story’s gotta be told. This is the birth, here are the strings. Mix it all in, and let the story.”

Without meaning to be nasty, this statement belies a complete lack of confidence, not to mention originality. While we are relieved to hear that the microphone is indeed working, it is nevertheless unclear why this story has to be told.

The story of this album is: build on what the pair previously did, namely an attempt to successfully fuse Butler and McAlmont’s favoured musical genres, ‘guitar-led big sounding indie’ and ‘funky old style soul’ respectively. The second track, Falling, which is the album’s first single, is a self-conscious attempt to recreate the swooping glories of Yes, the result of which is, thankfully, a gloriously swooping slice of indie soul. Very encouragingly, the following track, Different Strokes, has less of an indie feel, but has just as much enjoyable energy and sonic scope.

But just as we are getting geared up for more of the same, it all gets a bit disappointing. The title track Bring It Back is another great unashamedly poppy epic, while Sunny Boy finds a rare tenderness and sensitivity, but these are very much the exceptions.

The more expansive tracks lack the requisite passion and originality, while Butler’s quieter indie numbers just come across as faintly. There are encouraging signs of real quality here, though the whole project feels worryingly close to the musical equivalent of ex-lovers getting back together just because no one else will have them.