by Bekki Bemrose
published: 19 May 2021 in Album Reviews
Tweet 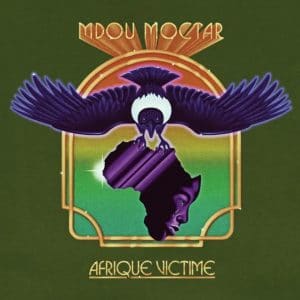 Mdou Moctar’s story is already a fabled one. Any existing press on the musician will offer forth his beginnings in the Nigerien village of Tchintabaraden, where his family’s disapproval of electric music led to makeshift guitars with strings made from bicycle wires. Later you’ll find his nascent talents were captured on mobile phones and memory cards to be distributed throughout West Africa, before he was discovered by Sahel Sounds label founder Chris Kirkley.

And here comes perhaps most surprising part: he made the first feature-length film shot entirely in the Tuareg language of Tamasheq, the Prince homage Akounak Tedalat Taha Tazoughai (Rain The Colour Of Blue With A Little Red In It). Following his first full-band recording, 2019’s Ilana (The Creator), Moctar is set to release what is sure to be the record that propels him to a huge audience. If justice prevails, the fable will be complete.

The blazing push and pull of Chismiten opens Afrique Victime by hot-stepping through a myriad of rhythmical elements. This deeply trippy intro hints at the breadth of purpose and imaginative range apparent throughout the record. Saharan contemporary music and Tuareg guitar are treated with a fresh pair of eyes and the shape-shifting fluidity of Moctar’s hypnotic playing.

Moctar has built a band around him that serves his astonishing fretwork superbly. In Ahmoudou Madassane he has a rhythm guitarist and wingman, and the call and response of their intertwining guitars beautifully frames Moctar’s quicksilver riffs. Bassist Mikey Coltun also proves the perfect foil for Moctar’s infatigable inventiveness. Rather than tethering his restless licks with a solid chug, Coltun always opts for the more interesting path as his baselines dance around the indefinable courses Moctar pursues. Meanwhile Souleymane Ibrahim provides a percussive backbone that compliments a thrilling unpredictability. This cohesion is displayed most effectively on the song that lies at the album’s core. The intensely psychedelic rock of the title track is a stunning example of Moctar and his band’s power. It’s difficult to think of a composition in recent times, particularly within the realms of guitar music, as exciting or moving as this.

ZZ Top and Van Halen are often namechecked as influences when Moctar’s name is mentioned, and undoubtedly the opening bars of Afrique Victime displays an earnest nod to the guitar heroes of yore. Moctar had somehow managed to rekindle an appreciation for a perfectly placed over-the-top guitar solo. Some of these riffs might translate as obnoxious in lesser hands, but in Moctar’s they are unapologetically glorious. Arguably, they more closely echo Prince’s expressive majesty in essence as they carry the weight of emotion not present in the aforementioned bands’ oeuvre.

Rhythmically, this music is unsurprisingly far more compelling than ’80s hair metal. The band effortlessly speed up and slow down, twist and turn to move us listeners towards a mind-melting psych-freakout of a crescendo ushered in by a run of dramatic drum machines. Afrique Victime is about 10 songs in one and the band dextrously lead us through a gamut of emotions from sadness to joy and much in between. It’s difficult to know what’s hit you when you come out of the other side, but my oh my, what a ride it is.

Lyrically, the track is a fierce inditement of the oppression of Niger’s people by French colonialists. Yet, despite the untold wrongs Moctar highlights that have been historically acted out against Niger and its people, the overarching feeling is that of love – for his people, his country and culture. This ultimately renders Afrique Victime all the more devastating a document of colonial crimes. On Bismilahi Atagah he sings “I didn’t know love can be so agonising/It has pierced deep within my blood and bones” and whereas so many in his place would, quite understandably, have made and angry and embittered record, Moctar displays a generosity of spirit that nails you to the spot.

Woven into the political critique and musical experimentalism are songs that broach both requited (Ya Habibti and Tala Tannam) and unrequited (Taliat) love. These odes to affections forfeit the mercurial spirit of his more politicised tracks for grooves that are consistent and true. The tenderness in these more personal songs further serves to reinforce the strength of feeling throughout the record.

Overall, Moctar’s creations are perfectly pitched in drawing from Tuareg culture and reaching beyond the traditional into new territory. The innovative trail he pursues is always in service to the song, rather than as a vehicle for his substantial talent. It is no mean feat that he and his band have managed to weave all elements together so seamlessly. Moctar is constantly contextualised though western figures, like many musicians who don’t originate from Western countries. In his case, he is often proclaimed the Saharan Jimi Hendrix. No one creates in a vacuum, this is true, but few capture their own individuality and utilise their ability quite this effectively. If Afrique Victime tells us anything, it’s that Mdou Moctar’s fire and passion are drawn from his homeland. The results are staggering.