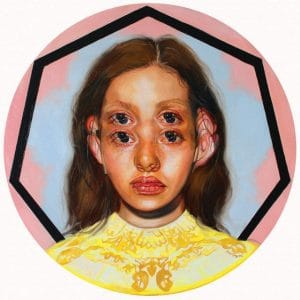 All credit to Melt Yourself Down and Decca Records for not postponing the release of 100% YES, at a time when many albums are being pushed back. After all, Melt Yourself Down don’t really make music for lockdowns or self-isolation; this is big, boisterous party music, perfect for all those festivals that have just been cancelled. Their sound is rooted in horns, bass and percussion, steeped in globe-spanning influences and articulated through the dynamo of frontman Kushal Gaya.

But those of us who are stuck at home can find much to enjoy here too. 100% YES sets out to exercise the mind and the conscience as much as the arms and legs. In this sense it’s a step forward from Melt Yourself Down’s previous two albums, in which the lyrics were often little more than callouts or mantras. Those songs might have been about specific things, concepts and ideas, but their meanings were delivered via mood and energy rather than through words. Conversely, most of the tracks on 100% YES have lyrics, themes and messages.

It’s a political album, then, but it stops short at preaching or protestation. Instead it takes advantage of music’s great capacity to speak many sentiments at once. Thus, the sax-forward Boot and Spleen, the first track, is a song about the atrocities of colonial India packaged in dance-punk vitality. Gaya’s somewhat manic delivery isn’t just the sound of a man summoning the party gods here: a Mauritian of Indian descent, he’s squaring his heritage with his current home and he sounds understandably fraught and fractious.

The skittish Chop Chop tackles public displays of capital punishment in Saudi Arabia, the song’s percussion as insistent and hard-edged as an executioner’s axe. Crocodile deals with addiction, building on the wordplay between the horrendous Russian synthetic opiate krokodil and its reptilian predator namesake with lines such as, “Like a crocodile looking for something to kill, inside you”. But this bleak subject matter is coated with disco sheen, a Bee Gees falsetto riding on a stone cold groove.

The music is colder and darker at times, as in the trap beat of From The Mouth, although that is tempered by warm licks from the two-pronged sax attacks of Pete Wareham and George Crowley. Born In The Manor is slow and bass-heavy, and here Gaya’s vocals sway between rap, growl and wail. The inspiration for this song is the Grenfell Tower disaster, so of course the music and lyrics are laced with darkness, but there is anger too: “You knew all along, admit it,” Gaya demands. There are nods to grime in the music too, fitting in a song about a tragedy of urban London.

Melt Yourself Down’s newfound social-political bent certainly adds new layers to their music, and indeed it feels entirely necessary as we grapple with coronavirus pandemic in the late capitalist Anthropocene. The only problem is that they seem to be taking on too much in a single album. Going straight from the Raj to Grenfell to the opiate crisis is all very well, but at some point there has to be a pause for reflective breath.

The title track, an instrumental that closes the album, is therefore very welcome when it arrives. It begins with a quote from the yogi Sadhguru, taken from a speech in which he declares himself “100% yes to life,” and grows into a trippy, sprawling piece, teetering on Indian rhythms. Melt Yourself Down have always had jazz antecedents and connections but they’ve never sounded more like a jazz band than they do here. While this album sometimes struggles to maintain focus in its thematic range, the music never misses a beat as it reaches far and wide.

Melt Yourself Down MP3s or CDs

Melt Yourself Down on Spotify