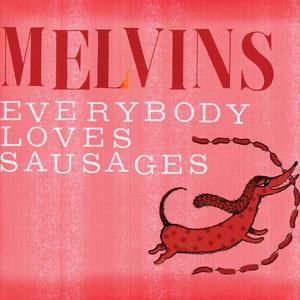 Part of the problem with the promise of a new Melvins album is knowing just which incarnation of the band is going to turn up. This is an outfit whose mantra is apparently “we play music to please ourselves” and as luck would have it, more often than not, that music also happens to please their fanbase.

Every so often they like to throw a total curveball into the mix that would test the patience of even their most ardent supporters. The barrage contained on The Colossus Of Destiny, for example, might well have been a perfect legitimate exploration of chaotic noise, but those expecting the thundering grunge of Stoner Witch or Bullhead would have been slightly wrong-footed to say the least.

Melvins though have always had a playful spirit throughout their career. From the Kiss albums to the trilogy of Maggot/Bootlicker/Crybaby, there have always been nuggets of humour riding alongside the pounding drums of Dale Crover and the roar of Buzz Osbourne’s guitars. That their latest effort, Everybody Loves Sausages, is an album of cover versions is not really a huge surprise; they’ve got a history when it comes to covers. And although this is an album that maintains the Melvins’ mischievous approach to their music, it is also very much homage to the music that they love and that has inspired them throughout the years.

In terms of inspiration, it is fitting that they cover Tales Of Terror’s Romance towards the end of the album. Like Melvins, Tales Of Terror influenced a young Kurt Cobain, laying the foundations of what would ultimately be termed grunge. This version is a pretty straightforward cover, and with little deviation from the original; it is almost reverential.

With the exceptions of the almost throwaway stab at Timothy Leary Lives and Divine’s Female Trouble (a slinky, almost funky affair), and the faux English Oi! take on The Jam’s Art School, in the majority of these songs there’s little in the way of immediate humour. In fact most of are played in a fairly straight manner. Set It On Fire might put a little flesh on the bones of The Scientists’ spare original, but it barely wavers. Similarly, Black Betty is thunderous fun, but involves little in the way of tinkering. Where this approach favours Melvins however is when they attempt songs that are resistant to being covered. Again, the band has form here too, most notably with their version of Wipers’ Youth Of America on Electroretard.

This time around, they attempt David Bowie’s Station To Station and Roxy Music’s In Every Dream Home A Heartache. Station To Station in particular is a revelation. Bowie’s epic masterpiece is bolstered considerably, becoming an even greater thundering tour de force, and perhaps hints at what the original might have sounded like had Mick Ronson been Bowie’s guitarist at the time. JG Thirlwell’s guest vocals are perfectly judged, sneering and soaring when needed. As a cover, it’s a bold statement, and a fine achievement. With the assistance of Jello Biafra, they take one of the few songs written about the finer details of s3x doll ownership an make it even more peculiar. They twist Roxy Music’s tale of suburban perversion a step further, and with Biafra filling his vocals with a shuddering creepy vibe it succeeds in being utterly chilling.

With the band straying very little from the original templates, the main surprises come when they have to change styles to fit the songs. Their version of The Fugs‘ disconcerting folk tune Carpe Diem works well unmolested. Occasional guitar stabs are the only concession to roughing it up a bit. The urge to dismantle and retool it as a behemoth must have been considerable, but leaving its subversive lyrics to breathe naturally works well and allows the subversive message to come through loud and clear.

Coming straight after the Black Metal blast of Venom classic Warhead, it’s the wonderfully dainty 8-bit take on Queen hit (You’re My) Best Friend that is most surprising, however. With Tweak Bird’s Caleb Benjamin handling the vocals ably, it’s the closest Melvins have ever come to sounding twee. It’s this ability to not only subvert music, but also the very foundations of the band itself, that makes Melvins such masters of their craft.