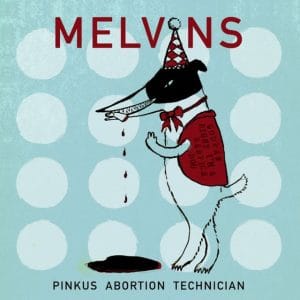 Of course this is not the first time Melvins have embraced the multiple bass option, their album Basses Loaded featured contributions from no less than 6 bassists, one of whom was Pinkus, who threw some serious menace into the song Captain Come Down. This is, however, the first time they’ve had two basses combining in their songs. Yet despite the assertion that this is “an experiment in the low end of the aural spectrum” there’s very little here that feels particularly experimental, which considering that this is band that deconstructed their own songs for the chaotic Shit Storm on Electroretard is something of a disappointment.  Whilst experimentation found on Pinkus Abortion Technician isn’t exactly pushing the boundaries, there are still some great moments to be found here, although this is really a Melvins album set to “fun”.

The Buttonhole Surfers get a couple of tributes, most notably on the first track which combines Moving To Florida with The James Gang’s Stop, to create Stop Moving To Florida. It’s a fairly cut and shut combo, that simply nails one song onto the other. Still, the switch from smoothed out rock to unhinged holler is strangely amusing. At the other end of the album is Grave Yard, a song that Melvins covered back in 2013 (whilst dishing out free ice cream). This incarnation stretches the original out into a five-minute cacophonous jam, and serves to highlight just what a peculiar and messed up record Locust Abortion Technician really was.  The Beatles also get the cover treatment, as Melvins take I Want To Hold Your Hand and give it a dose of heavy. Even with the application of distortion, the pop-genius of the original shines through.

When not paying tribute to other bands, Melvins still have a fair few good songs themselves. Don’t Forget To Breathe is probably the pick of the bunch, with its slow, creeping bassline and spidery guitar line creating a slighty claustrophobic atmosphere. That the hook of “don’t forget to breathe” is delivered in a vocal that might well be in the midst of strangulation, auto-erotic asphyxiation or an asthma attack only adds to the itchy, uncomfortable nature of the song. Flamboyant Duck follows, and initially treads a similar path to Jane’s Addiction’s more pastoral moments before upping the ante considerably by throwing a banjo/sludge riff trade off into the mix. Prenup Butter has a stab at a little psychedelic rock and largely comes up smelling of patchouli and weed thanks to the application of some particularly squelchy guitar effects. On the other side of the coin are Embrace The Rub and Break Bread which are more straight ahead rock songs, albeit with the Melvins grunge/sludge template applied.

Pinkus Abortion Technician is another solid album from Melvins, but is nowhere near their best. It’s not strange enough to be labelled a curio, it’s not massively experimental and there are very few surprises even with the two-prong bass deployment. This is the sound of a band having a bit of fun and amusing themselves and, for the most part, it is pretty engaging. So whilst this isn’t a “fans only” type release, it is far from essential, which seems a strange thing to say about a Melvins album