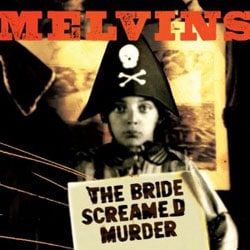 Twenty-five years into their career, and with somewhere between 15 and 20 studio albums released, Melvins are showing no signs of letting up just yet. With the fairly recent introduction of Big Business bods Coady Willis and Jared Warren into the fold they’ve been releasing some of their best work with (A) Senile Animal and Nude With Boots. The Bride Screamed Murder is a slight feint away from the two albums that preceded it, but it is, nevertheless, distinctly Melvins.

The Water Glass kicks things off in typical style with a flurry of granite heavy riffs which should, according to received wisdom, give way to a thundering outpouring of guitars designed to break bones incredibly slowly. Not averse to toying with expectations (check out the feedback fest of Colossus Of Destiny for further proof), Melvins let the guitars dissolve away into chaotic feedback and rumbling drums. A militaristic drum pattern takes over from this point, along with the kind of call and response vocals that would have been a highlight of Full Metal Jacket had Gary Glitter been given the role of Gunnery Sergeant Hartman rather than R Lee Emery. It is the sound of Melvins mobilising a rock ‘n’ roll army – all of whom are driving Panzers, obviously.

Evil New War God takes us back to the unstoppable riff. King Buzzo’s vocals rip across the solid groove of ever twitching guitars and frantic drums. At the half way point, the song changes mood dramatically, settling down in to a creepy Gothic keyboard part. It would have fitted perfectly on Fantomas‘ Director’s Cut album, had there ever been an unreleased soundtrack for a film entitled Narcoleptic Slugs Ate My Baby’s Face for them to cover.

The bright, up-tempo riffing of Pighouse flies in the face of the sludge description usually used to identify Melvins outpourings. Like Evil New War God, it is very much a song of two halves with the band performing a remarkable handbrake turn and wrapping things up with a Masonic chant and the ping of a triangle.

Elsewhere, it’s business as usual with enormous elephantine riffs and harrowing solos springing from Buzz’s guitar and drum heroics spiralling out of control courtesy of Dale Crover and Coady Willis. The addition of keyboards to their barrage of sound gives the likes of I’ll Finish You Off an almost magisterial feel.

Their crushing dissection of The Who‘s My Generation is a fantastic reworking – slowing one of the original anthems of teenage rebellion to a crawl and pummelling it till only the lyrics bear any resemblance to the original. The funereal march of the mid-section is particularly eerie and loaded with murderous portent.� Whether this is a satirical swipe at Daltrey’s generation, who by now are hobbling around in stately fashion or crawling along in mobility scooters, remains unconfirmed.

The unexpected a cappella hymn of PG X 13 rounds off the album in peculiar fashion. When the guitars finally join in, they’re a lament loaded with resignation; the complete opposite to the thunder of the chords that opened the album. If The Water Glass was Melvins declaring war, then PG X 13 is the sound of a band ruminating on the consequences of that conflict. It’s a perfect end to an album full of surprises and met expectations. Another great Melvins album, then.