Melvins – A Walk With Love & Death 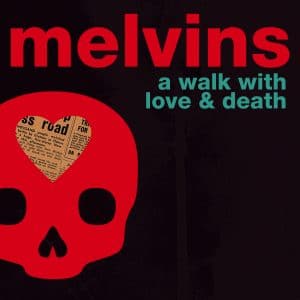 Melvins’ work rate is so prolific that it is not entirely unusual to find them releasing two albums of new material in the course of a year, but Incredibly, over the 30 odd years of the band’s existence, they’ve never released a double album. A Walk With Love & Death puts that right, and sees that particular box on the band’s CV well and truly ticked.

However, this being the Melvins, this is not your typical double-album affair, where every thought and half-baked idea is thrown into the mix just to fill out running time. Whilst the title might sound as if there’s a definite concept at work here, these are in fact two very different albums nestled within a single package.

The Death side is a fairly straightforward Melvins album that showcases the band’s sludge encrusted take on rock, while the Love side takes the form of a soundtrack to a short film by Jesse Nieminen and is a sprawling collage that is almost impossible to get to grips with even when coupled with the images of the short trailer currently available. If anything, the brief clip available makes things more baffling and disturbing.

The introduction to the album Black Heath suggests that everything is in its right place. A low key affair and vaguely subdued, this is not Melvins at their most raucous but at their most laid back. A basic undulating riff underpins Buzz’s familiar vocal tones, but the devil is in the detail, and the band’s ability to utilise the space around the riff to lay down some atmospheric touches gives the song an uneasy feel. Just as you’d expect from an album entitled Death.

From here, they segue into Sober-delic, a similarly paced, stoned jam that doesn’t sound sober in any way at all such is its languid state of mind. It’s a slow-burn of an opening, but it’s not too long before heavy-slabs of riffing make an appearance and Euthanasia kicks through the gears and shakes the band from their stupor. What’s Wrong With You highlights the band’s pop influences as it injects a little glam rock into proceedings, albeit it with a slight punk sneer. Christ Hammer tidies things up considerably, almost shaking off any idea that Melvins has any kind of association with sludge or grunge at all. With its almost clean guitar tones and vocal harmonies, this is Melvins at their most direct and punchy. As if that weren’t enough, they then throw an absolute earworm into the mix with Cactus Party, a song that despite its occasional angular moments, is a pop delight.

If the Death element of this release highlights the elements of Melvins’ career that most are familiar with (it’s not exactly a eulogy), then the Love side sees them in relatively uncharted territory. It’s not as if Melvins haven’t explored experimental forms before, but this is them at their most committed to the form. The amalgam of spoken word, field recordings, guitar cacophony and ambient noise is unsettling to say the least. When coupled with the images of the film (what little of it is available to see), the whole thing is absolutely terrifying. It’s Like watching Faces Of Death on a heavy dose of nasty psychedelic pharmaceuticals. Even when there’s the briefest hint of anything approaching a song (Give It To Me for example) everything is stretched and morphed into a truly unpleasant form.

It’s like playing a warped vinyl LP, whilst it is still melted. The electronic noises and hollered shouts call to mind the work of Don Hertzfeldt, and in particular his fairly recent take on The Simpsons Couch Gag that baffled those unfamiliar with his stylistic approach. Making sense of it all is perhaps a fool’s errand with this half of the album, and immersion is the only way forward. Admittedly, it isn’t a particularly easy listen, but love isn’t always easy, even if it is always worthwhile.