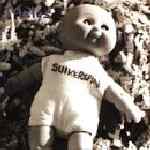 ‘Suikerspin’ represents five years of Melys and is a good point of entry for new fans that have recently been introduced to these Welsh wonders. Many new fans will have found them via ‘Chinese Whispers’ number 1 in John Peel’s Festive 50 2001.

This CD compiles all of their sold-out Sylem EPs, including both 2001 singles – the ‘Chinese Whispers’ and ‘I Don’t Believe In You’ (also in the festive 50 at number 35).

‘Suikerspin’ is a fantastic collection of bittersweet, sometimes dark but always groovy pure pop. This is an album for those who like their pop archetypically perfect with a fair measure of charm.

Melys are certainly cruelly underrated oddballs currently on the fringes of British rock. Their sound has been described as Dusty Springfield backed by St Etienne.

With an ever growing European fan base, increasing amounts of promotion, radio airplay and critical acclaim, will 2002 be the year that sees Melys step centre stage at last? They certainly deserve it but one gets the feeling that, although they would welcome it, they won’t lose any sleep if it doesn’t happen.