Mercury Rev – All Is Dream 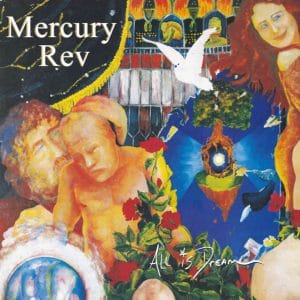 For years, Mercury Rev seemed destined to remain in the “obscure US indie-rockers” bracket. Albums such as Yerself Is Steam were cult items treasured by the few who had fallen victim to it’s left of field charms. However, with the release of 1998’s Deserter’s Songs, the New York band found a whole new audience entranced by their strange, beautiful music. They didn’t quite become mainstream, but the sale of nearly 1.5 million copies meant that a lot is riding on All Is Dream.

After the masterpiece that was Deserters Songs, it’s inevitable that a mild sense of anti-climax is the first sensation on listening to this album. It’s not as immediate as its predecessor, and lacks the addictiveness of tracks such as Goddess On A Highway, and Hudson Line. However, with each listen it becomes clear that Mercury Rev have produced another magnificent album that will stand shoulder to shoulder with their back catalogue.

The album opens with The Dark Is Rising, which is quite possibly the most gorgeous song you’ll hear this year. An atmospheric keyboard chord builds up, and then Jonathan Donahue’s ethereal voice sings “I dreamed of you on my farm / I dreamed of you in my arms / In my dreams I’m always wrong”. It would be a heart made of stone that would fail to melt at this track. It builds beautifully until by the end you think you’re listening to the best Bond theme never written.

Nothing else on the album comes close to touching the eerie beauty of The Dark Is Rising, but there are several standouts here. Donahue’s lyrics are as obscure as ever, but he raises a smile with A Drop In Time, which includes the wonderful couplet “But I was caught, like a fleeting thought / Stuck inside of Leonard Cohen’s mind”. Elsewhere, as on the climatic guitar heavy Hercules, we’re told that “On th’ hill stands Collossus an’ yr mind is freezed / Clouds from yr past now at last open to receive”. Answers on a postcard please.

However, the sometimes pretentious lyrics do not spoil the music at all. Night And Fog is probably the most commercial track on here, but sadly is unlikely to breach the Top 40. Lincolns Eyes is so haunting it’s almost sinister, and Spiders And Flies is another beautiful highlight.

This is not an album for listeners who don’t like to be challenged. However, if you’re one of the many people who still play Deserters Songs on a constant loop, this will more than satisfy your craving for more.