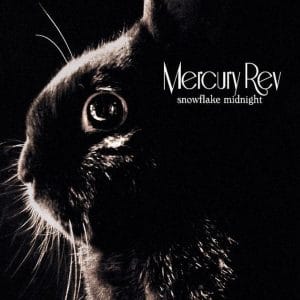 It is 10 years to the day since Mercury Rev released their career-defining album, the incredible Deserter’s Songs. It would seem churlish to point this out, especially as every reviewer from here to the bands’ native New York has begun by stating the same fact, but as they’ve chosen such a very specific landmark to release their new record, Snowflake Midnight, it bears some scrutiny at least.

Truth is, Jonathan Donahue’s motley group of Americana experimentalists have never quite lived up to the Catskill Mountain-high levels set by Deserter’s Songs in the intervening years. That album both confirmed and finished their legacy – saving the group from near bankruptcy and proving an unexpected critical and commercial hit, but consigning their post-Deserter’s records, the underrated All Is Dream and the underpar The Secret Migration, to constant adverse comparison.

Now, a full decade on, Mercury Rev have decided to mark the anniversary by, for want of a better term, ‘doing a Radiohead‘ – blindsiding both critics and fans alike with a giant step away from the dark, baroque orchestrations of the last three records into warm, lush electonica. Whether this is a conscious decision to mark their reinvention at this particular time is unknown, but it certainly has this effect, right from the swirling, dizzying, almost rave-like chimes of opener Snowflake In A Hot World, it is clear that this is a very different beast to what we were expecting.

Lead single Senses On Fire is probably the most out and out dancey moment on the record – an exercise in euphoric electronica, which echoes the now sadly-departed Alpinestars. The track is simply superb – a wild, flailing, unpredictable outpouring, Donahue’s distorted, orgasmic scream of “Ready or not, here I come” a world away from their most measured, and treasured, single Goddess on a Hiway.

The album’s undoubted highlight is the eight-minute long Dream Of A Young Girl As A Flower, which dips and soars through numerous styles, from pounding, ear blistering techno through ambient moodscape to glorious, sting laden dance without once losing track of the structure of the song. It’s not an easy task, and it’s a mark of the quality of the band that they can pull something this ambitious off.

The band also prove they can do pared down – another highlight is the lovely Faraway From Cars, a little reminiscent of Air‘s dreamy soundscapes, with Donahue singing about “There’s a little part of you/ that’s far away from cash, far away from pain”. It’s a slight but uplifting moment, which is only slightly devalued by its sharing an uncomfortable metaphor with the ubiquitous No Cars Go by Arcade Fire.

Of course, a new direction can take some getting used to, and there are as many misses as hits. Runaway Raindrop is a pretty incomprehensible industrial work out, with the band taking the unwise decision to offer the listener the dreaded ‘spoken word section’ that blights many a great record, and there are a couple of extended trips through the uneasy mind of Fridmann (A Squirrel And I, People Are So Unpredictable) that seem to lose their way about halfway through under a bombast of imagination.

Surprisingly though, Snowflake Midnight, if it is heard widely outside of fan circles, may win the band more fans than their more straightforward output. Deserter’s Songs marked a shift from the heavy psychedelia of their first three records to a new maturity, winning the band plaudits from across the spectrum. This album may do the same, and although not a classic, this is a ballsy and heartfelt reinvention that shows there is life in the old dog yet. One more thing that might bear scrutiny – this is the band’s seventh album, after two trilogies of vastly different styles. We can only hope that this third incarnation has a classic in waiting in another decade’s time.