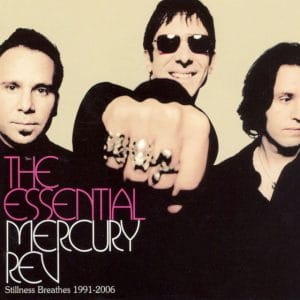 Fifteen years and 32 tracks worth of art-rock history from New York indie rockers who still aren’t as big as they ought to be.

Mercury Rev are a band of two halves. Their early albums, Yerself is Steam and Boces, were chaotic noise experiments encouraged by their mentor Tony Conrad, a contemporary of John Cale and La Monte Young, and their leftfield peers The Flaming Lips, with whom lead guitarist and eventual frontman Jonathan Donahue originally led a double life (Rev’s David Fridmann also produced The Lips’ 1990 album Priest Driven Ambulance). Championed by Rough Trade, the New Yorkers enjoyed an early UK tour that gained – and maintained – them greater popularity here than in their own country but rock’n’roll partying got in the way and at the end of their equally against-the-rules second album Boces, the band parted company with unpredictable lead singer David Baker.

Their first album without him, the prophetically-titled See You on the Other Side, experimented as much with harmonies as feedback and marked the beginning of a new direction for the band, which would be fully realised with Deserter’s Songs, a stunning album of intelligent art rock with enough tunes and choruses to bring them critical acclaim and commercial success in equal measure. Having upped the ante, they have kept it there through follow-ups All Is Dream and The Secret Migration, taking their rightful place amongst too-cathcy-for-indie, too-clever-for-the-mainstream soulmates such as the Lips and R.E.M.

Considering their history, the obvious split in a two-disc set might have been between the pre- and post- See You… albums, but we’ve got an even bigger treat in store. The Essential Mercury Rev divides instead into greatest hits (or as close to it as they’ve got) plus an odds and sods of covers, Peel Sessions, remixes and more, which makes for a very pleasing package indeed. Disc One is hardly brimming over with chart botherers but it is none the less peppered with a good few radio friendly sing-alongs that should have crawled higher up the top 40 than they did, from their earliest near-hit, 1998’s Goddess On A Hiway, to their most recent, 2005’s In A Funny Way.

The Rev aren’t always easy listening – take Chasing a Bee as a prime example -but in many ways their less commercial works from the early albums sit more comfortably amid the Deserter’s Songs-and-after tunes than they do alone. This could have allowed the tracks from the transitional See You on the Other Side to bridge the gap between the two phases of their career beautifully but instead the ones that have been chosen as its representatives here – Everlasting Arm and Empire State (Son House in Excelsis) – are the two that most recall the earlier material. Incongruously, the sole representative of second album Boces, recorded at a time when the band was both imploding and being thrown off stage at Lollapalooza for being too noisy, is the gentle and almost whimsical Something for Joey. They have since declared the Boces period as one they would rather forget, remembered as sparsely in concert as it is on this compilation.

Whether they’re offering up playfully gentle pop, ambitious orchestral pomp The Flaming Lips would be proud of or Velvet Underground-style feedback harmonies, Mercury Rev rarely disappoint. The transition from original vocalist David Baker to Jonathan Donahue doesn’t jar, partly because the songs are structured into a coherent whole rather than presented in chronological order and partly because they’re just so unbearably good. Mixing together songs from all six albums works remarkably well, toning down the more indulgent excesses of the noisefests while reminding the poppier numbers of their music’s darker edge.

Disc Two is filled with B-sides and rarities and, as this is Mercury Rev, they are of course exceedingly good B-sides and rarities, including everything from Deadman, on which the band provide backing music to Suicide‘s Alan Vega as he reads from his novel Cripple Nation, to covers of songs by The Beatles, Bowie, Nico, Dylan and others, to interpretations of traditional folk songs such as Streets of Laredo. There are tracks only previously available on a Secret Migrations bonus disc, rare Peel Sessions (1991’s Coney Island Cyclone) and the Chemical Brothers’ Remix of Delta Sun Bottleneck Stomp, which sadly leaves no place on Disc One for the original. The result is perfect. This is what music should be.