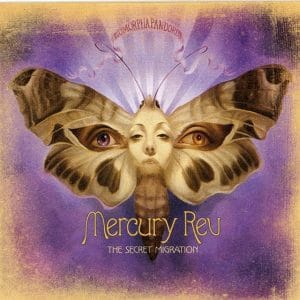 They’ve been through a fair few incarnations, have Mercury Rev. From the ‘difficult’ art-rock displayed in early albums such as Yerself Is Steam and Boces, through to the total masterpiece of Deserter’s Songs in 1998, they’ve always been one of the most challenging and rewarding bands around.

They’ve also been pretty influential – groups such as The Flaming Lips and Grandaddy wouldn’t have had half the success they’ve enjoyed if Mercury Rev hadn’t laid the groundwork beforehand. The band’s last album, All Is Dream, was a mysteriously beautiful opus filled with cinematic , piano and string led ballads which, while it wasn’t quite as good as Deserter’s Songs, did possess at least one stone-cold classic in The Dark Is Rising.

Three years later, and it’s possible to see the legacies of All Is Dream in the work of Coldplay and Keane, albeit in a rather watered down version. So, could The Secret Migration become one of the biggest sellers of 2005 and bring Mercury Rev the success they richly deserve? Well, probably not, but that doesn’t stop it from being one of the first great albums of the year.

Opening track Secret For A Song is a swirling, majestic epic of a song, with a soaring chorus that you can almost feel surging. Jonathan Donahue’s vocals are as fragile and as whispy as ever but still manages to sound powerful. It’s the perfect opener to the album, and is followed by one of the band’s most accessible moments yet, Across Yer Ocean (the chorus of which is likely to lodge in your brain and nag incessantly).

If there was one criticism of All Is Dream, it’s that was all a bit too dreamy, leaning towards the soporific at times. That’s one charge that certainly can’t be levelled at The Secret Migration however. Arise is built upon an unstoppable drumbeat which bursts into life on the chorus, while Vermillion, one of the best tracks here, builds slowly from its piano led verse until it gathers unstoppable momentum throughout the song. They haven’t forgotten how to do a heart-stopping ballad though, as the gorgeous First-Time Mother’s Joy proves.

Donahue’s lyrics, while still pretty obtuse, manage to stay away from the pretentious here. Diamonds employs some quite beautiful language (“look how the sun, captured by the rain, glimmers and falls and lands in golden balls”) to stunning effect while the aforementioned Vermillion notes that “you never gave up on me somehow…I know love sounds impossible but some words are just so hard to say”. It’s one of Donahue’s most personal moments, which makes it all the more effective.

Credit should also go to guitarist Grasshopper Mackowiak, who again succeeds in creating some truly incredible soundscapes for Donahue’s ethereal vocals, helped in no small part by long-term producer Dave Fridmann – a man in huge demand right now thanks to his excellent work with Flaming Lips, Delgados and Ed Harcourt.

As with all Mercury Rev records, this isn’t an album for those with short attention spans or those looking for comfortable background music. The Secret Migration is an album that demands repeated listening and the more you listen to it, the more you get out of it – with not a dud track on here, this is another masterpiece from the boys from Buffalo, New York.