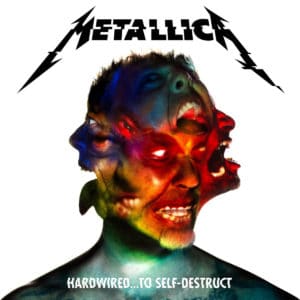 It seems as if Metallica are in a strange place at the moment. Look at that cover. Look at it. It’s awful, isn’t it? What are they trying to say with that picture? There’s no way any normal human being would look at that artwork and say “that’s amazing, I want it on my album”. The whole thing looks like a Coldplay concept, if Coldplay had gone on a massive acid binge and then attempted to set themselves on fire because they were cold.

Yet, after listening to Hardwired To Self-Destruct it’s an image that seems strangely appropriate. Metallica’s rehabilitation since the death of bassist Cliff Burton has been arduous, and this album is the latest step on a long road as the band come to terms with their past, future and present. The multi-headed beast of confusion that graces the cover of the album accurately sums up the content; it’s confused, angry, playful, and bug-eyed crazy. Unlike the artwork however, the actual music isn’t complete bobbins.

Every time Metallica release a new album, the first question seems to be “is it a return to form?” What is a return to form for Metallica? It’s easy to forget what an innovative band they’ve been over the years. They led the charge in the thrash scene, creating at least two solid masterpieces in the process. They crashed into the mainstream with The Black Album, becoming one of the biggest bands on the planet in the process and doing so without seeming to damage their credibility. Just one of these achievements would have been enough for most bands, but not Metallica. They were always trying to push themselves and were the yardstick for almost every other metal band.

Sometimes the wheels would fall off, but they were always changing and morphing. With Death Magnetic, the general consensus seemed to be that Metallica were attempting to rediscover their roots and take things back to the start. Perhaps it was an attempt to gain some sure footing after the therapy album St Anger, but then they went and dabbled again with the almost universally panned artistic endeavor with Lou Reed, Lulu (which was nowhere near as bad as everyone made out). A return to form in the context of Metallica is hard to pin down as it can mean many things. Thrashy? Innovative? Huge riffs? Clean production? A drum sound that sounds like an actual drum kit? Artistic? Garage band? When you’ve had a career as long and interesting as Metallica’s it could mean almost anything, but in all honesty, what people probably mean by a “return to form” is “is the new album as good as Master Of Puppets?”

Hardwired To Self-Destruct is not as good as Master Of Puppets. But then almost every metal album made since hasn’t been as good either. However, over the course of Hardwired, Metallica do attempt to tap into the spirit that informed their first three albums as well as nods to other moments in their career too, most notably Load and The Black Album. In looking back, Metallica has attempted to make sense of their own daunting back catalogue, and find a way forward.

Heading way back into their past, the intro to Confusion grabs from Diamond Head’s Am I Evil? (a song Metallica covered on the B-side of their Creeping Death single) and promises a grumbling slab of primal metal. What transpires is a song that on the surface is about the effect of war on the psyche, but could also be seen as Metallica attempting to make sense of where the band is at the moment. Throw in a few abandonment issues with the line “father please come home, shell shocked all I’ve known” and you can practically hear Dr Phil’s hands rubbing together in anticipation, verging on ignition. Confusion might sound a bit forced, particularly around the verses, and appropriately befuddled at times, but it does take stock of their themes (war, abandonment, Diamond Head, insanity) and attempt to make some kind of sense of it all. It feels like another step of their healing process, and it’s the first time that Metallica has sounded like they’ve made a breakthrough, to use the parlance of a therapist.

Also tapping into that Diamond Head influence, in terms of title at least, is Am I Savage? Diamond Head asked Am I Evil? It turned out they were. Here Metallica question their savageness, but offer no real answers. They do however explore familiar lycanthrope territory, previously covered on Of Wolf And Man on The Black Album. Werewolves are pretty savage, but it’s not really until they hit the instrumental section at the midpoint that Metallica really let loose. Up until then it’s all talk of scratching and howling at doors, which is not exactly red in tooth and claw but rather the actions of most domestic pets in need of a trip to the garden. There’s a hint at a Melvins riff in there though, and it’s good to hear James Hetfield’s guitar tone sounding truly abrasive again. Savage? A little, perhaps, but not adverse to a tummy tickle now and again.

Those waiting for the band to go full circle will also be pleased. Atlas, Rise! heads back to when they were a bone fide thrash band, and as it progresses, it almost serves as a five minute history lesson. It calls to mind the moment that they fused their thrash beginnings to a more mainstream sound with The Black Album and also channels some of the new wave of British heavy metal influence that was prevalent in their early work. The twin guitars in particular drag early Iron Maiden to the fore and serve as a reminder of just how fresh both Maiden and Metallica used to sound.

Also tapping into that early thrash sound are Hardwired, which isn’t a million miles away from tones of Damage Inc, and Spit Out The Bone, which finds Hetfield rediscovering the vocal harshness he possessed in the late ’80s, and also pops a few allusions to One into the mix courtesy of Lars Ulrich’s snare rolls.

For those wanting later period sounds, Dream No More is the sound of Metallica of getting a little adventurous, at least on the verses where Hetfield’s layered vocals find him channelling early Alice In Chains. It’s not as if they’ve not done this kind of thing before – it’d sit well on Load/Reload – but the searing guitar interjections and thunderous riffs give the whole thing an invigorated edge.

There are moments where they lose focus. The chugging riff of Now That We’re Dead would have most likely been rejected by Lars back in the day as “stock”. They’re not dead, but it’s tempting to check for a pulse. Here Comes Revenge is another chugger, in the vein of a Black Album cast off whilst the traditional “quiet” track Halo On Fire fulfils that criteria for Hardwired To Self-Destruct to some degree with its quiet guitar passages for the verses. It’s no Nothing Else Matters though, as the NWOBHM style intro and the more brutal rhythm parts put paid to any navel gazing introspection. Unfortunately it drifts badly, wandering around aimlessly in a morass of lumpen riffs and pointless soloing. The well-meaning Murder One (presumably a tribute to Lemmy) is a perfectly passable stomper, but its mid-tempo crawl hampers it, particularly when placed next to the rapid fire blitzkrieg of Spit Out The Bone, a song whose attitude and pace owes a fair bit to the live fast, play fast teachings of Metal’s fallen figurehead.

Away from these slight indiscretions, Hardwired is a solid listen. Perhaps it’s best summed up by Moth Into Flame. Crafted for the mosh pit it caters for anyone that just wants to let fly for four and a half minutes. It’s a song that sounds like a band that’s remembered what it is they do well; they’re re-invigorated and enjoying playing again. There’s plenty of returning to old ground, but this is not a derivative record, and neither is it a return to form. It finds Metallica rediscovering what makes them tick.