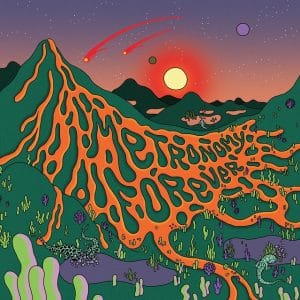 One of the key elements behind the success of Metronomy’s breakthrough album The English Riviera was Joseph Mount’s ability to take a concept and stitch it together with a number of different musical threads. On Metronomy Forever, the band’s sixth album, front man Mount looks to repeat the trick, recreating the feel of listening to a radio station for an hour.

It is a brave idea in a world where attention spans have never been shorter, but through the same grasp of different musical styles and a natural rise and fall running through the record, Mount achieves his aim. There are shorter interludes, the equivalent of trailers for other programmes, and they serve to bring forward the main players, Mount’s pop music gems.

These are headed by Salted Caramel Ice Cream, a tightly wound electro number which finds Mount hitting the high notes. “She’s sparkling like a fresh glass of Premier”, he gushes about his love, then endearingly, “She’s glistening, like a fresh minted quarter. She’s the splash in my water, She’s so posh, mate, I called her ma’am.”

Lately, meanwhile, is a sparkling track, rich in carbonated keyboards that bubble up to the surface irresistibly. It also bristles with ambition. “She could be the greatest…I know she’d be the greatest, if only she was open to see me.”

These are two of the album’s euphoric moments, but elsewhere a little doubt creeps in. Insecurity has bold music but less certain lyrics. “I’ve got an insecurity,” sings Mount, “what is love, what is hurt, what is she saying? I take it cos I’m being a man.” Sex Emoji is similarly heady but reeks of desperation, amid the need for instant social media gratification. Upset My Girlfriend draws the listener in with its confessional lyrics. “I wrote off my dad’s car,” admits Mount in a broadly humourous set of asides. “Unfortunately I wrapped it round a tree.”

Metronomy get ever more diverse in their use of musical styles, the link between each being Mount’s distinctive vocal. Walking In The Dark is a slinky track, sneaking along at walking pace in a kind of dub-reggae style – which turns out to be a lot better than that description sounds. Driving is great too, using a Jean Michel Jarre trick or two with its synthesized dive bombing.

This is peak Metronomy, Mount and his charges at the top of the game as they move with pop music’s ever-evolving sound. Yet no matter how much technology gets thrown at their music they will always be recognisably English, and it’s to his credit they look set to ensure this remains an ever present element of their richly developing discography.

The band is now an essential part of English electronica, their palette ever more interesting with each record. The colourful artwork covering Metronomy Forever is a parallel for how far they have come, its title an indication of how far they could go. All we have to is enjoy the ride.