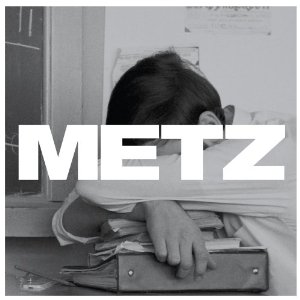 Listening to METZ’s debut album is like taking a leap back in time to the late ’80s/early ’90s. Before every band in possession of a Big Muff pedal was labelled grunge, Sub Pop were busy documenting the scene in Seattle where a proliferation of bands were creating loud, abrasive rock music that straddled punk, garage and metal. Eventually, it seemed that all the bands with a vaguely rock edge coming out of Seattle (or indeed anywhere) would be hogtied and packaged under the all encompassing grunge label, but in the early days, the likes of Nirvana, TAD and Mudhoney weren’t hamstrung by expectation; they could just get on with making full on rock music.

Had METZ existed back in 1988 there’s little doubt that they’d have been instantly adopted by Sub Pop. As it is, despite the 20-plus years that have passed, METZ have still found their spiritual home, and Sub Pop are once again turning towards the kind of music that established them. Of course there are many bands making a similar noise to METZ at the moment; label mates No Age spring readily to mind as do A Place To Bury Strangers. But this album is most certainly closest in sound and spirit to those early Sub Pop days.

A continuous white hot blast of feral riffs, hammering drumming, feedback layers and occasionally raw screaming vocals, METZ is a short, sharp, shock. Opening track Headache is perfectly titled, a relentless riff surely designed to instigate migraines. Only Alex Edkins offers any relief from the onslaught with his impassioned and surprisingly catchy vocal lines. Get Off follows in similar vein with a rolling riff and thundering drums, Edkins sounding not unlike Mark Arm as the band take Mudhoney‘s Garage Rock sound and bludgeons it remorselessly.

Sad Pricks is an even more ferocious beast, sounding like a head-on collision between Melvins and Fudge Tunnel. It is awash with discordance as it lurches violently and screams until the bitter end. Rats couples an almost harmonious vocal line with furious anger and comes up sounding like an organic Godflesh. Wet Blanket displays METZ’s early Sub Pop influences, borrowing heavily from Nirvana’s Negative Creep and marrying it to a backbeat borrowed from Big Black. Negative Space meanwhile manages to be wiry, muscular, and utterly terrifying whilst somehow retaining a pop edge (perverted though it may be).

Yet for all the influences that can be spotted throughout the album, they still manage to sound like a band doing their own thing. Admittedly at times it’s like being hit over the head continuously with a hardback copy of Michael Azerrad’s Our Band Could Be Your Life, but there’s enough depth to these songs to suggest that this is more than simple homage. Over time, there’s a surprising amount of subtlety to be found in the layers of fuzz, feedback and hollered vocals. The bass lines are taut and dextrous, the waves of metallic guitar fuzz develop riffs almost by sleight of hand, and there’s considerably more melody lurking under the surface than there first appears. Most importantly, this is an album that sounds fresh despite having its roots firmly planted in the post-hardcore/pre-grunge era. There have been many bands who’ve tried to scale these heights over the years, but METZ have done it with considerable aplomb.