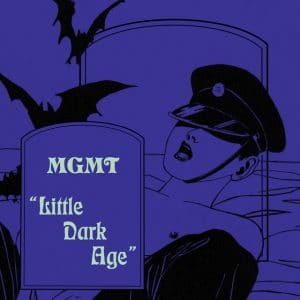 MGMT are about to make you feel old. The reason? It is just over 10 years since the Brooklyn duo released their standout statement on celebrity living, Time To Pretend. It shot them to prominence – and was backed by a substantial album, Oracular Spectacular – from where we still hear Electric Feel and Kids at the very least. The album was seen as surely just the prelude for a long stint at the top of the game.

The reality turned out to be rather different, due mainly to the contrary nature of Andrew VanWyngarden and Ben Goldwasser themselves. Ever the adventurous experimenters, they explored some pretty far out musical areas in their next two albums, but the fleeting moments of genius they conjured up were few and far between, and many of their fans were left disconnected and scratching their heads.

Little Dark Age is a determined bid to win them back – and on this evidence it should succeed. It returns to the approach typified by Time To Pretend, with positive music thrown into sharp context by darker lyrics intent on leaving it with a slightly sinister underbelly.

The disembodied vocals of Little Dark Age are an indication of how the world has changed, serving also as a reminder of how they saw it coming in Oracular Spectacular. “Welcome to the shitshow, grab a comfortable seat!” sings the first song She Works Out Too Much, while Ariel Pink’s remote voice talks of constant exercise. “The only reason we didn’t work out was he didn’t work out,” he observes.

It’s all too much for the duo: “I can never keep up. Sick of liking your selfies… I’m constantly swiping it, tapping it… it’s never relaxing – I need a new routine.” As a song about the perils of image obsession and social media addiction, it takes some beating – but there is more, in TSLAMP (Time Spent Looking At My Phone). Here the subject is being unable to remove themselves. “I try to pull the curtains back, turn you off but can’t detach,” they complain.

Increasingly aware of their social predicament and the world’s place in the grip of technology dependence, the duo prove the value of personal interaction with two beautiful and very personal songs. James is an absolute diamond, a paean to James Richardson, guitarist in the MGMT live band. Hushed vocals, a brushed electro beat and typically quirky harmonies set the backing, while the promise “I’ll make you tea and breakfast” hints of a particularly enjoyable English sojourn on tour. As an ode to friendship it could hardly be beaten.

Me And Michael inhabits a darker place, looking at the unexpected death of a close friendship, “too happy with ourselves to notice when the change had come”, and ending with harmonies that reek of regret and admonishment.

Elsewhere the feelings are crystal clear. The good natured tune of When You Die fails to hide the massive barbs within. “Go fuck yourself, you heard me right, don’t call me nice again,” it says as the subject, a failing magician, hallucinates on his way to death. Days That Got Away is more a musical curiosity, a lazy lick of a track evading capture through subtle unconventional rhythms and syncopations.

Little Dark Age appears to have been a cathartic album for MGMT to make. With such strength of feeling in the lyrics, it benefits greatly from their largely positive musical approach. The tunes are back, the harmonies are still weirdly endearing, and the album hangs together really well as a whole.

As a single piece of work it is a fine achievement, a rival to Oracular Spectacular in its personal and political observations. All are made through songs where melodic, harmonic and rhythmic invention are key. Having reined in their experimental tendencies and focused on a common goal, the boys are most definitely back in town.