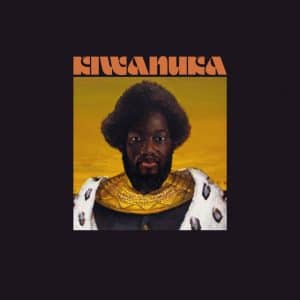 When Michael Kiwanuka released his debut album Home Again in 2012, it would have been easy to write him off as just another earnest troubadour. Springing from the same West London scene that begat Mumford And Sons, Laura Marling and Noah And The Whale, Kiwanuka supported Adele and won the BBC Sound of 2012, but although Home Again showcased his undoubted talent, it all seemed a bit too smooth at times.

It was Kiwanuka’s second album Love & Hate which propelled him up a level – drafting in Brian Burton aka Danger Mouse and London-based producer Inflo was an inspired move, and he had the confidence to open the record with a 10 minute version of Cold Little Heart (later to be used as the theme to the HBO show Big Little Lies). It was a magnificent album, and the formula is continued with the same collaborators to stunning effect on KIWANUKA.

Those capital letters are important – as is the cover art depicting him as an African prince. Kiwanuka has struggled with anxiety and imposter syndrome all his career, but his third album sees him throw off the chains of self-doubt. It’s an album which raises a middle finger (in the politest way to the record company executives who tried to persuade him to change his name to sell more records, and to his struggles with culture and identity which produced Black Man In A White World.

So, a song like You’re Not The Problem is the perfect introduction to KIWANUKA: a shuffling funk groove which nods to Kendrick Lamar‘s I, before spiralling down its own path. It’s the lyrics which stand out though, Kiwanuka persuading the listener (and himself) to put the worry aside: “Don’t hesitate, time heals the pain, you ain’t the problem.”

It’s an album that skilfully mixes the personal and the political. Hero is both defiant and introspective – “I won’t change my name, no matter what they call me” runs the opening line, before moving onto examine racism and police brutality (“It’s on the news again, I guess they killed another”), while Another Human Being is an almost ambient, eerie soundscape: touches of piano and acoustic guitar underneath samples of civil rights voices and, most disconcertingly, a gunshot.

Like on Love & Hate, KIWANUKA takes its cues from classic rock, and mixes the genres skilfully: there’s the soulful rock of Rolling, the touches of gospel in the standout Living In Denial, and the relaxed jazz of Piano Joint (This Kind Of Love). Anchoring it all is Kiwanuka’s remarkable voice: rich and warm, and capable of summing up all kinds of emotion in a single line (such as I’ve Been Dazed’s “I need peace of mind, help me carry on”.

This is also an album that reveals hidden depths every time you listen to it. Even the less immediate tracks like the languid, seven minute long Hard To Say Goodbye has an aching yearning to it that slowly makes itself seen, while the way Solid Ground unfurls into its almost psych-rock conclusion becomes ever more impressive the more you hear it.

KIWANUKA doesn’t waste a single one of its 51 minutes, and seems destined to receive the same sort of acclaim as its predecessor. Now that he’s set the self-doubt aside, the sky would seem to be the limit for Michael Kiwanuka.