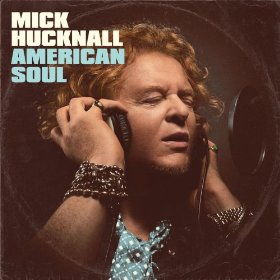 There can be few musicians who have suffered more derision than Mick Hucknall. A lot of it seems unfair. With his group Simply Red, Hucknall became one of the UK’s biggest selling musicians with his extremely commercial brand of blue eyed soul. The derision perhaps is not so much based on his musical output, which has veered dangerously close to overbearingly bland at times, than on what he represents. The image of Hucknall is of an out of touch relic from the ’90s. He is still characterised as a womanizing lothario, known in some circles more for his hair colour than his musical invention. His latest project, a collection of soul covers, is unlikely to markedly change his public perception.

Soul music, in particularly Amercian soul, has been the main influence on Hucknall’s musical career. Simply Red’s fist single, 1985’s Money’s Too Tight (Too Mention), was a cover of a song written by The Valentine Brothers. Since then he has intermittently speckled his work with liberal versions of any number of obscure soul songs and well-known standards. His first solo record, 2008’s Tribute To Bobby, was a tribute to the songs of Bobby Bland, perhaps his greatest influence. American Soul seeks to repeat that formula, albeit with the songs drawn from a collection of different artists.

There is no doubt as to the quality of the songs collected here. The likes of Etta James‘ I Would Rather Go Blind and Otis Redding‘s peerless soul ballad That’s How Strong My Love Is are unequivocal classics. Hucknall performs them competently and his voice is still staggeringly good. He manages to bring a rich warmth to the tracks, which just about lift most of them beyond reverential karaoke. The music is smoothed out coffee table soul pop, and he does little that’s adventurous with the arrangements. It would take a brave performer to mess with some of these standards though, and Hucknall has never been a musician known for his risk taking abilities.

Using a rather liberal approach to the theme of American soul, the album’s highlight is a striking rendition of Antony And The Johnsons‘ Hope There’s Someone. It is an unusual song for Hucknall to cover. The result is a tender and heartfelt rendition with Hucknall’s powerful voice showing all its dexterity. Some more interesting choices like this one would go a long way to lifting the album beyond a functional nostalgia exercise.

The problem with American Soul is not so much Mick Hucknall but the concept in itself. It’s clear Hucknall has a great love and empathy with this music, but he would be far better trying to channel this love into some genuinely new music that takes those influences and creates something interesting with them. As it is, American Soul is something of Christmas cash-in, with the express intention of selling strongly to his seasoned following. An inevitable prime time spot singing on Strictly Come Dancing can’t be far off. This is music that originates from the soul, but it is delivered in an entirely soulless fashion.