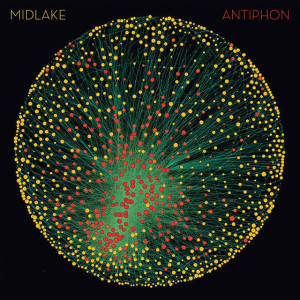 The departure of Midlake’s singer and chief songwriter Tim Smith in November 2012 begs the question as to just what constitutes the identity of a band. Is it entirely bound up in the personality and style of the lead focal point or is it instead something less definable? In the case of the Denton, Texas group, who decided to carry on with a reconfigured line up, fourth album Antiphon is a record that shows that a band’s identity can survive intact despite personnel upheaval and stylistic change.

Antiphon is the sound of Midlake slightly repositioned. Now led by guitarist and new vocalist Eric Pulido, the band sound more strident and muscular. It’s the first Midlake record than can wholeheartedly be described as a rock record. The rock that Midlake creates though is ornate and atmospheric. The sound is often bigger yet beautiful passages of florid instrumentation remain. In searching for a way forward it seems that the band have decided to take little pieces of their past and combine them together into something bigger and more all encompassing.

The opening title track’s vigorous rolling, rumbling groove is indicative of their upscaling. While still identifiably Midlake, this is a sound that is altogether more striking. Provider is just as powerful as Pulido sings oblique lyrical lines like “Follow me down a fox hole” and references to a “golden age”. In truth though it’s a difficult vocal debut for Pulido. With a rather flat and expressionless voice, he struggles to make much an impression on the songs. Fortunately, this is more than countered by the music, which is sublime throughout. Dreamy, mysterious and dizzyingly hypnotic, the songs swirl between moods, textures and tones. It’s telling that the best moment is the spellbinding instrumental Vale. Here, waves of rousing rock grooves recede back to quiet lucid calm before erupting once more.

While the folk leanings of previous album 2010’s The Courage Of Others have mostly been dialled down in favour of groove led jams like the classic rock of It’s Going Down, the greatest pleasures remain the softer, dream like moments. Aurora Gone is a prime example; gentle and mesmerising, spindly tendrils of delicate flutes and plucked guitar are weaved into a lovely tapestry of sound. Midlake’s beauty and ability to create gently mysterious music remains unrivalled.

As a harder and more expansive record, the groove led pieces of psychedelic rock are more rustic and warm than the spacey sounds favoured by the likes of Tame Impala. Yet there is still infinite power in the droning rock of Ages or the morose questioning of This Weight. What these songs suggest is a general broadening of the Midlake sound. Final track Provider Reprise is a grand orchestrated crescendo that provides a fitting conclusion to a record of lofty ambitions.

It’s always difficult for any band to create a new record following a degree of personal trauma. Midlake have used the departure of Tim Smith to challenge themselves as a band. In the accompanying press material for the album, Pulido suggests that this is the outfit’s most honest album, as it sees all the members creatively working together for the first time. Tim Smith’s vision may have departed but in its place is a re-energised Midlake who are working towards refining their identity and taking it onto another level. There are still creases to iron out, but Antiphon marks a significant step as Midlake move on to the next phase of their career.